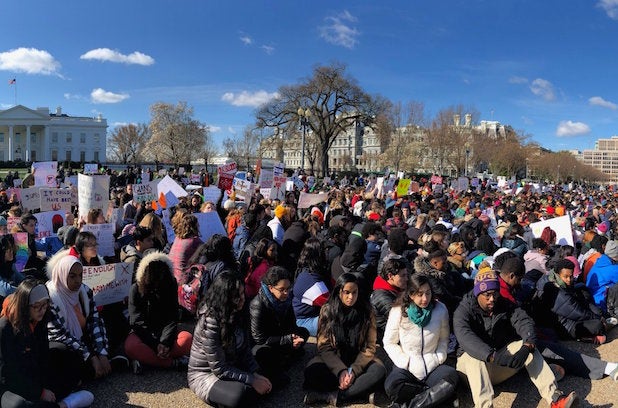 Students across the country marched as part of National Walkout Day Wednesday to honor the 17 students who were murdered in the school shooting at Stoneman Douglas High School in Parkland, Florida last month.

Beginning at 10 a.m. local time, students left their classrooms and headed to the streets to peacefully call for stronger gun control. Other goals of the protests were to ban assault weapons, require universal background checks before gun sales and pass a gun violence restraining order law that would allow courts to disarm people who display warning signs of violent behavior.

There’s a “sea of people everywhere. You can barely see the ground,” Stoneman Douglas student Sam Zeif told CNN. “It really shows us we’re not alone.”

As students marched in demonstrations across the country, folks on Twitter took notice.

“Proud of all of you! Never give up! You are THE change!” wrote Miley Cyrus.

“The young people of this generation give me so much hope,” said Chris Evans.

Also Read: 'Real Time': Parkland Survivors Thank Adults for Letting 'Us Rebuild the World That You F---d Up'

Of course, not all of the blue checkmark crowd supported the march. Conservative celebrities and media personalities were relatively silent on Twitter during the protests, but those that spoke out opposed them.

“[W]e sure need to secure our schools,” said Ted Nugent, but “a new gunlaw will be counterproductive.”

TV personality Liz Wheeler complained that the marches are about “banning guns,” adding that “Anybody who tells conservative students that refusing to walkout for 17 minutes means you don’t care about the 17 victims of Parkland… is lying.”

Here’s what some of the folks are saying:

Proud of all of you! Never give up! You are THE change!

So amazing to see young people take back their power and USE it! #NationalWalkoutDay pic.twitter.com/nuUDdqkpkD

The young people of this generation give me so much hope. Are u listening @GOP? Time for gun laws to change. And for you 2A-ers, relax, no one is saying you cant own a gun, your right to ‘bear arms shall not be infringed’. Just looking for common sense reform! #NationalWalkoutDay https://t.co/jB7NCb0MJj

"The ultimate measure of a man is not where he stands in moments of comfort and convenience, but where he stands at times of challenge and controversy ." – Dr. Martin Luther King, Jr. #NationalWalkoutDay https://t.co/sBtJ0II6YG

Dear Students,
I stand with you. I support you. #NationalWalkoutDay

So inspired by all the young people there today. ???? #NationalWalkoutDay #enough #walkout pic.twitter.com/9UUMaywZQl

So proud of this next generation… #bydhttmwfi#NationalWalkoutDay

I love how active and strong our young people are today. Thanks for having the courage to speak up and stand together. No more gun violence. Walking with you in spirit. #NationalWalkoutDay

One month later and students continue to say never again, to stand up, to speak out. Never too young to make a difference. #NationalWalkOutDay #StudentsStandUp pic.twitter.com/gJKdazr6j8

The youth outnumber and outsoul you @GOP & @NRA. #NationalWalkoutDay

If more guns make us safer, why aren't we safe? #NationalWalkoutDay

The driver next to me & I both tooted our horns in support, and as we smiled at each other I registered what it was they were chanting: “Less Guns. More Kids.”

They’re not out there being political, they’re out there because they’re afraid of getting shot to death. In their schools and elsewhere.

It didn’t used to be like this. Kids weren’t so scared when there weren’t so many guns. It’s that simple.

They deserve better from us.

Your voice is powerful and you’re never too young to make a statement. Truly moved by the students nationwide who participated in #NationalWalkoutDay – we hear you.

Anybody who tells conservative students that refusing to walkout for 17 minutes means you don't care about the 17 victims of Parkland… is lying.

The walkout is not about solutions. It's about banning guns. #NationalWalkoutDay

Average number of deaths in the U.S. per day:

Common, Jane Fonda and the Scene at the Respect Rally in Sundance (Photos)

Sundance 2018: Stars and activists gather for a protest in snowy Park City, Utah

If you couldn't make the Sundance Film Festival this year -- or were too tied up at one of the several Women's Marches popping up around the country -- we've got you covered. Check out the pictures from the "Respect Rally" in Park City, Utah, which included several actors and activists from Sundance.