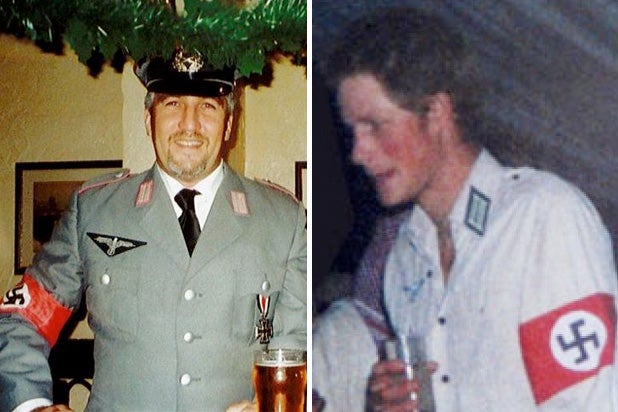 Things had gotten a bit weird. Hate was beginning to shimmer from my computer monitor like waves of heat from the desert floor. My shoulders began to slump under the weight of my own incompetence in handling the constant de-friends and hit-and-run threatening texts from anonymous right-wing trolls.

I turned to my hate antidote which involved a regimen of binge watching “The Great British Baking Show.” Now that too was being challenged when a years-old photo of judge and master baker Paul Hollywood showed him wearing a Nazi uniform during a costume event.

Oh, Paul. The ghosts of our past never fail to come back, and when those ghosts are exhumed in the press, we pay an inflated price for what is just another monster costume, skewed by typical British humor. Hell, Prince Harry wore one.

Was Paul honoring Nazis? Not even close. I can’t imagine a white supremacist fretting over a savarin with chantilly cream. What he was doing was what we all love to do: Dress up like monsters and serial killers on Halloween. How many of us as kids combed our hair over to one side and penciled in a Hitler mustache while zieg-heiling our friends? We called it a “goof” back then. My poor horrified mother caught me doing it when I was a boy and I quickly lied, saying I was Oliver Hardy.

THWACK! It was a French maple rolling pin that connected with my head. That pin never saw a breeze of flour as mom didn’t cook. She burned water. The rolling pin was the size of a Watts Walloper and hung precariously on a kitchen hook waiting for that moment when it could be put to use: a Jewish weapon in the hands of a Valley mom. She made her point, as has the press. Onward.

What is important is that Paul Hollywood owned up to his mistake and expressed extreme remorse. Prince Harry did the same. Got it. I make a living at fighting against anti-Semitism and I’m cool with it. It does nothing to negate what is an incredible retreat for me into my “happy place.”

“The Great British Baking Show” opened a door for me that will not be tarnished by Paul’s faux pas. This is not as much a show about baking as it is a lesson in chemistry. Not the chemistry of glutens, yeast and heat — this is about the chemistry between two people who imparted their knowledge and passion with a combination of humor and humanity. Judges and baking experts Mary Berry and Paul Hollywood are spirit guides who tap into a part of our psyche that is hungry for the relationship that they make look as easy as Paul’s Irish Soda Bread, or as intricate as Mary’s show-stopping creations.

Our dependence on opiates and French fries has insulated us against experiencing what life is about. The art of conversation and collaboration that is so expertly demonstrated on the show is the recipe for our salvation, and it carries enlightenment and drama.

In  2013 episode, contestant Deborah fessed up to using Howard’s closely guarded ingredients and it wasn’t just an admission of trifling with a fellow contestant’s trifle. It was a courtroom breakdown not unlike a “Perry Mason” cross-examination, and it came forth willingly. “The Great British Baking Show” offers lessons in cooperation and support. Contestants aren’t out for blood, they’re out for icing — and in their quest to satisfy the steely-eyed Hollywood and angelic Berry, they elevate themselves beyond their own expectations.

Juxtaposed against the competition is the Master Class. Both Hollywood and Berry trade off roles — one as the creator, the other as the sous-chef who dutifully measures out ingredients while trading good-natured barbs and asides. As Paul Hollywood works the glutens out of a lump of dough, Mary watches approvingly. When Mary assembles a crown of ladyfingers, expertly injecting 100-proof filling, Paul leans on one arm and gently chides her about the amount of Bailey’s in the cream.

They look at each other when they speak. They listen to what each other has to say, and they react. Neither of them wait for the other to take a breath before they launch into their own diatribe. They have refined the art of conversation and they bring it back to a level where it becomes as refreshing as a lemon custard tart.

Had I known about this show, I would never have sought therapy. There would be no need. While the biscuits rise, stuff happens, and as Mary Berry looks at a collapsed sachertorte, searching for something positive to say — I feel that she raises her gaze to look at me, assuring me that although things may look dismal, what’s inside is “scrummy.”

I could see Mary reacting the same way to that photo of Paul grinning toothily while wearing an SS uniform. It was a dismal error in judgment, but inside he still remains scrummy.

When I tackle Paul Hollywood’s recipe for English muffins, I’ll attack the dough with a new-found passion. If the dough doesn’t proof long enough, and the bake doesn’t turn out perfectly, I’ll eat it anyway, and if you’re lucky, I’ll share it with you.