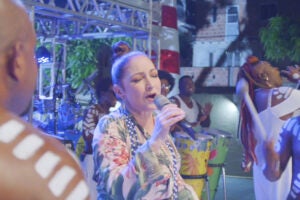 Nielsen’s gaming analysis outfit, SuperData, wrote in a recent report on player spending that console earnings were up 40% in September compared to last year, driven by the typically busy fall game release schedule.

Take-Two Interactive’s “NBA 2K21” was the top-earning title in September with 1.9 million copies sold after its launch on Sept. 4.

Most players bought “NBA 2K21” for digital consoles, bringing its sales up 19% compared to those of its predecessor, “NBA 2K20,” which came out Sept. 6 of last year.

In-game revenue — sales of cosmetic items, skills or downloadable content in “NBA 2K21” — was up 8% compared to the previous game.

SuperData analyst Carter Rogers told TheWrap that sales of simulated NBA video games began taking off in August when a torrent of sales of the older “NBA 2K20” was brought on by the delayed NBA season. Last month’s resurgence of interest in “NBA 2K20” drove its earnings up 165% compared to the previous year’s title.

Also Read: Why TikTok Could Be the Perfect Social Network for Gaming

“Launch sales of major sports sims did grow year-over-year in 2020, but some of this growth would have happened in normal times,” Rogers said. “What’s unique about basketball is that ‘NBA 2K20’ did especially well in August as its last month as the current (‘NBA 2K’) title on the market. The game’s performance was no doubt helped by the NBA bubble extension and subsequent excitement around basketball.”

Rogers added that at the beginning of the coronavirus pandemic, enthusiasm for virtual sports spiked. “Interest in watching virtual versions of traditional sports and motorsports grew given the lack of real-world alternatives,” Rogers said.

“Twitch streaming is why ‘Apex Legends’ broke records when it launched early last year and why ‘Fall Guys’ was a hit in August,” Rogers said. “Usually, you’d see this right around launch, with a game publisher often paying streamers to play… however, organic adoption by streamers is still possible, especially if a game has unpredictable gameplay that’s entertaining to watch.”

One such unpredictable game that’s recently gone viral thanks to streamers is Innersloth’s “Among Us.” The title was streamed to over 430,000 people by Congresswoman Alexandria Ocasio-Cortez on Oct. 20. The archived stream has now been viewed by roughly 5.4 million people on Twitch.

Also Read: Why 'The Voice' Producer Jim Roush Is Investing in a New Gaming Television Network

The game became a cultural phenomenon despite being released two years ago; it was highlighted on the App Store as a good fit for friends apart during the pandemic.

Despite its widespread popularity, “Among Us” didn’t earn enough revenue on mobile to crack the Top 40 earners. In-game purchases are limited in “Among Us” to cosmetic items and a $2 charge to remove ads. “Earnings were, however, still extremely high for a game made by only three developers,” SuperData noted.

Riot Games’ massive online multiplayer game “League of Legends” clawed its way back up to be the top-earning PC title in September after sliding down SuperData’s ranking; it was fifth in player spending last month. Interest in the title was likely piqued in part because Riot is launching a new online, abridged version of its hit title Oct. 27 called “League of Legends: Wild Rift.”

Rogers noted that game publishers going after player nostalgia found their bets paid off in September. Activision Blizzard’s re-release of “Tony Hawk’s Pro Skater 1 + 2” sold 2.8 million digital copies after its Sept. 4 debut. Those figures were “significantly higher” than prior remakes by Activision, including its “Spyro” and “Crash Bandicoot” series.

Nintendo’s “Super Mario 3D All-Stars” reissue was the biggest “Mario” title launch ever on the Nintendo Switch, with 1.8 million copies sold in September.

Back in April a re-release of Square Enix’s “Final Fantasy VII” sold 3.5 million units in its first three days of release, more than any other PS4-exclusive game to date.

Rogers said that while remastered games are doing well now, “it’s unlikely we’ll have an endless growth of game remakes.” Eventually, publishers might have to start revisiting classic online games originally developed for the computer.

“Publishers will eventually run out of the 90s and 2000s era classics that are uniquely well-suited for remakes,” Rogers said. “Once this happens, we might see a shift to reinvigorating classic online titles in the vein of ‘World of Warcraft Classic.'”

While overall digital spending dipped slightly from last month — which totaled a record $10.8 billion — the industry is not at all expected to downturn, especially going into the holiday season. The debut of two next-generation consoles, the Xbox Series X and PlayStation 5, will also increase demand for new games. Some versions of the next-generation consoles come without a disc drive, so players will have no choice but to download their favorite games digitally.

“November and December are typically the highest-earning months of the year for console games,” Rogers said. “That sector should do very well this holiday season given major titles and new systems, some of which are digital-only.”