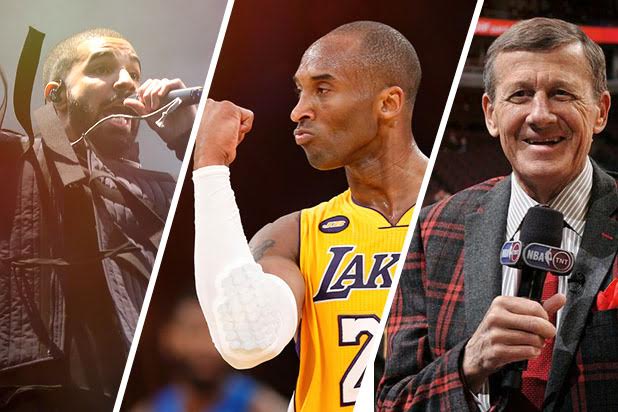 NBA All-Star Weekend will feature a farewell to Kobe Bryant, the return of a broadcaster who battled leukemia, and even the star of “Creed” showing off his court skills.

The weekend is packed with events leading up to Sunday’s game, and the host city is Toronto — making this the first All-Star Weekend held outside the United States in the 65-year history of the event.

So what should you care about? Here are our Top 5 reasons to watch:

5. Lots and lots of Drake

Like it or not, expect a ton of Hotline Bling: Drake will be everywhere this weekend.

The Toronto native isn’t just a celebrity NBA fan. He is also the Raptors’ global ambassador. He even joined then-Mayor Rob Ford on stage for a news conference when Toronto was named the host city back in 2013.

“We’re committed to making sure that he puts as much of a footprint on the All-Star Week as the NBA will allow us to,” Maple Leaf Sports and Entertainment president Tim Leiweke told the Toronto Sun.

4. Michael Jordan will take the court

The NBA’s “All-Star Celebrity Game” is Friday at 4 p.m. PT/7 p.m. ET live on ESPN. This year’s version is USA vs. Canada, with four-time NBA “Celebrity Game” MVP Kevin Hart coaching Team USA. The coach of Team Canada? That would be Drake. Obviously.

The Slam Dunk contest used to be the marquee event of All-Star Saturday night. These days, the league’s most popular is the “Foot Locker Three-Point Contest,” because watching Stephen Curry shoot is just as much fun as watching Michael Jordan dunk was back in the day.

Curry is the reigning NBA MVP, has the highest-selling jersey, and won the NBA championship last season. His Warriors are dominating with a 48-4 record. It’s safe to say he’s the league’s biggest star. He might even be the best shooter ever.

2. Craig Sager will be there

Turner Sports NBA reporter and fashion icon Craig Sager was diagnosed with leukemia in April 2014. Less than a year ago, he underwent a clinical trial that resulted in him undergoing chemotherapy 24 hours a day for two straight weeks. After missing last year’s NBA All-Star Weekend, Sager feels good enough to return and work the event this year.

“Certainly, it’s something I missed terribly a year ago. I’ve done every one since 1988,” Sager told Awful Announcing.

Bryant ‘s 18th All-Star Game will be his final one, as he is hanging up his Nikes after the season. Bryant led all players with 1.89 million votes, proving that NBA fans want to witness the event’s all-time leading scorer one last time. He’s been named the All-Star MVP four times, and don’t be shocked if sentimental teammates look for every opportunity to make it five. It’s going to be weird without him next season.