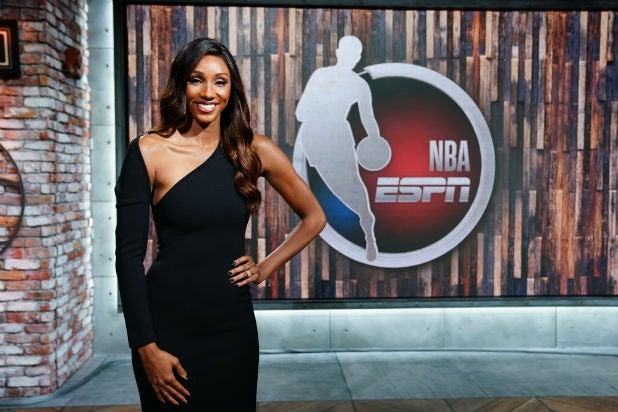 As sports fans turn their focus from football to basketball in the wake of Super Bowl LIV, so does ESPN’s Maria Taylor, who has tipped off her first season as host of “NBA Countdown.”

The “College GameDay” and “ABC Saturday Night Football” reporter recently transitioned from the gridiron to the court, and will now be a regular teammate to analysts Jalen Rose and Jay Williams on ESPN’s flagship NBA show for the rest of the season. Moving forward, “NBA Countdown” will also have a “newsier” slant with the addition of reporter Adrian Wojnarowski, according to ESPN.

Taylor fills the host seat that was previously occupied by “SportsCenter” host Sage Steele and most recently, Michelle Beadle. She has already earned high praise from former ESPN analyst Bill Simmons on how she handled the first show following Kobe Bryant’s sudden death. Taylor “did a superb job navigating an emotional, complicated pregame show … she played point guard + made it work,” The Ringer founder tweeted on Feb. 1.

While she is best known for her college football expertise having joined ESPN as a sideline reporter in 2013, Taylor says she has always loved the NBA. “I grew up in Chicago and during the height of the ’90s Bulls era,” she told TheWrap.

But Taylor is well aware that she has taken on a whole new challenge in the transition from football to basketball, and she is not taking it lightly. “For me, it also like learning a totally different subject — this is biology and not calculus,” she explained. “They are different sports with different people, teams, front office executives who you need to talk to.”

“This is a standalone show for an hour where we are just talking about the NBA so I am getting my hosting chops again compared to reporting on ‘College GameDay.’ There is pressure in both of them — I am more of a conductor for the NBA and an informer for college football.”

“NBA Countdown” airs Fridays on ESPN before NBA doubleheaders, and will begin to air Sundays on ABC before the NBA “Sunday Showcase” game.

Read the full Q&A with Taylor below. (Editorial note, this interview was conducted prior to Kobe Bryant’s death on Jan. 26).

TheWrap: How did the new role come about?
Maria Taylor: I covered the women’s college basketball tournament the last three years, hosting from the selection to the Final Four. Then I started working on the NBA draft, reporting and doing the interviews after the guys got drafted (that was my first induction into the NBA), and I covered the NBA combine for the last two summers. After that, I went to the ESPN bosses and made it clear that if anything ever came up in the NBA then I would love to be involved in it.

You started on “NBA Countdown” in the midst of the college football season, how did you manage both?
It’s definitely been a lot of juggling! The Heisman Trophy ceremony (on Dec. 14) was one of my busiest weekends as we had “NBA Countdown” and were still doing “College GameDay,” but all in all my bosses have all worked well together as they know my schedule before I do.

Viewers have seen a lot of changes in hosts, analysts and even studio location at “NBA Countdown” over the years, how are you going to make this iteration sustainable?
The biggest factor is chemistry. We are hoping to entertain, we are hoping to inform, and we are hoping that it feels like you are walking into a living room and are hearing from some of your favorite basketball analysts about the game you love. That is the tone I want to help set and I think that is the goal we all have with one another.

I worked with Jalen on “Get Up,” he is a veteran and he has been there through all the changes. He knows what it takes to make a good show great, and also knows if there is something wrong how we can fix it. He is the foundation of the entire show. Jalen is an entertainer but is also so smart and knowledgable.

The goal is trying to find what is the best match for the league. I feel like we’ve always had great people in place, I don’t think it’s ever been a question of that. At the end of the day, it is what everyone wants and feels is best. We certainly hope for longevity and that this is the beginning of a long relationship and the start of an “NBA Countdown” family.

What was the best advice you’ve gotten going into this?
Everyone was so great and said “congratulations and go crush it.” They have all told me the same thing: the NBA audience is so honed in that they can spot a fraud. It’s almost like, “you had better know your stuff!” That is going to be a key for me and I appreciate the straight-up honesty.

I’ve always said all I can do is be me. The best advice I have ever gotten is from Robin Roberts, who said that genuinely being you in person will translate on camera. If you are not genuine, then the viewers won’t like you … they may not even know why they don’t like you, but it’ll because you aren’t being genuine. I think I am a lighthearted host, but I don’t know if I am the most technically sound host out there! I love to engage in conversation, I am a good listener, I like to follow up, I want to be thoroughly engaged with the show and just throw myself into it.

What different edge do you plan to bring to the show moving forward?
We hope to do a total breakdown on “Countdown” and bring you more than just game stats and players’ information, but let you get to know them as people as well. For example, we worked on a spotlight on Tobias Harris about his grandfather being a Tuskegee Airman. We all know Tobias Harris as a great shooter for the 76ers, but let’s put him as a human being in context. That is what we hope to do more on “Countdown” when we say we want to entertain, inform and turn viewers into fans of people, not just players.

My goal is to find those kinds of stories. We do a great job of that on “College GameDay” and I hope this to be similar … we are going to tell you a story that you didn’t know about the player that you love. That is the biggest thing I would like to bring from one project to the other.

When it comes to the action on the court, what do you think are the storylines to watch for the rest of the season?
The most exciting thing is going to be crash course in the west that we’re seeing between the Lakers and the Clippers, who’ll inevitably run into each other at some point during the playoffs. The Lakers have been historically a dynasty and are now trying to rise back up to that rank with all their super star power in the Staples Center. It’d be great to see them duking it out against Kawhi Leonard and Paul George.

The other big question is that literally somebody has to step up to be the beast in the east, and we don’t know who that is going to be yet. Technically, it is the Bucks but when it came to the playoffs last year, they didn’t meet those expectations … there are still a lot of questions surrounding them.

Lady Gaga proves she knows how to make an entrance, Shaq pays tribute to Kobe, and Gronk just came to party

The Kansas City Chiefs were no doubt still partying well into Monday morning after their fourth quarter thriller in Hard Rock Stadium. But long before they took down the San Francisco 49ers, the top names in entertainment and sports hit the party scene in Miami.