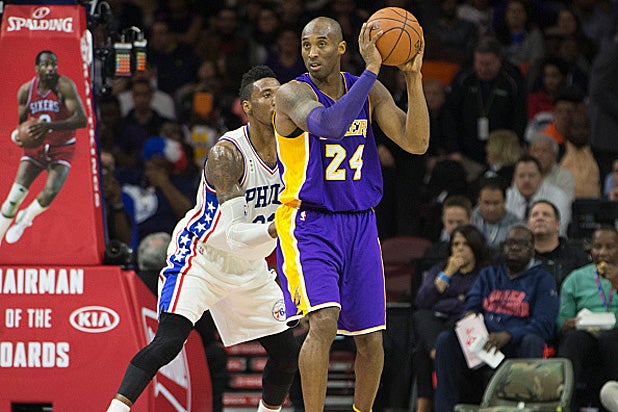 Sports fans are never so obsessed with a little bouncing ball as on the night of the NBA draft lottery.

And after finishing with a disastrous 10-72 record this season, the Philadelphia 76ers got the No. 1 pick Tuesday for the first time since 1996.

The Los Angeles Lakers will get the chance to see if any of the 2016 draft class can attempt fill the huge hole left by Kobe Bryant’s retirement when they take the second pick.

The Lakers, who finished a dreadful 17-65 and now must transition into the post-Kobe Bryant era, had a 55.8 percent chance to land a top-three pick, according to ESPN.

Rounding out the top three were the Boston Celtics, who lost to the Atlanta Hawks in the first round of the playoffs this year.

“Laker fans all over should be happy with the No. 2 pick because the Lakers will get another really good player,” legendary player Magic Johnson said soon after the lottery, predicting that the team will take either Ben Simmons or Brandon Ingram — or whichever player the 76ers don’t choose first.

Laker fans all over should be happy with the No. 2 pick because the Lakers will get another really good player.

Earlier in the day, fellow 76ers alum Dikembe Mutombo — who now works for the NBA as a global ambassador — got Philly fans’ hopes up when he tweeted congratulations on their victory about four hours before the ball dropped.

He sent a subsequent tweet saying he was just excited but was keeping his fingers crossed, but seeing as he was right, he’s now being deemed as many as a soothsayer.

Sorry, guys.Got excited about the @sixers odds and got ahead of myself.Still keeping my fingers crossed for tonight. pic.twitter.com/u6bFaNTJml

“I want to let people know there was no conspiracy,” Mutombo told The Associated Press in a subsequent phone interview, saying it was a mistake and that he thought “a lot of people understood the error that was made.”