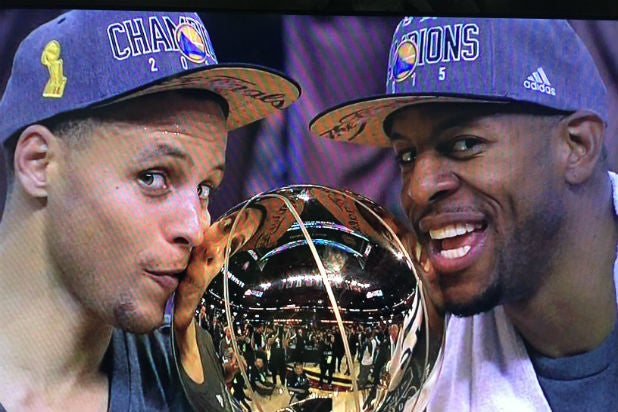 Congratulations are in order to both the Golden State Warriors and ABC.

Stephen Curry’s squad earned the coveted Larry O’Brien Trophy Tuesday night with a Game 6 road win over LeBron James and the Cleveland Cavaliers. On Wednesday morning, ABC was happy to report that these NBA Finals were the top-rated ever on the network, which has hosted the championship series since the 2002-2003 season.

Per the very preliminary metered market ratings from Nielsen, the six-game series has averaged a 13.9 overnight rating, which is up 31 percent from a 10.6 for the 2014 NBA Finals. Last year’s best-of-seven series was wrapped up in five games by the San Antonio Spurs, which defeated James’ then Miami Heat.

Also Read: Why Jimmy Kimmel Is the Real Winner of This Year's NBA Finals

For the 48th consecutive time, the NBA Finals is expected to win the night across all of television — broadcast and cable — more than doubling its competition.

Locally, in the champs’ San Francisco market, Game 6 generated a record 40.7 overnight rating. Additionally, the contest delivered a 42.0 in the Cleveland market, which ranks as the fifth-highest rated NBA game ever on ABC or ESPN.

Digitally, the 105-97 finish was viewed by 939,000 unique viewers on the WatchESPN app, which is the most ever for an NBA game on the platform. In addition, the final game of the season drew an average minute audience of 292,000 viewers, which also ranks as the most-watched NBA game ever on the platform.

Final, more accurate ratings will be available later on Wednesday.