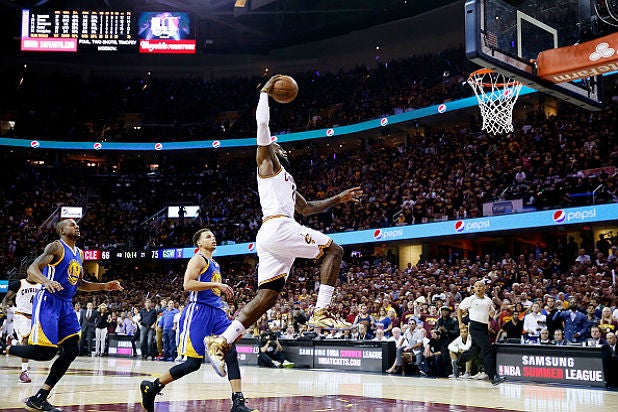 ABC has a definite rooting interest in this year’s NBA Finals: A long, competitive series. PLEASE.

The Disney broadcaster needs to draw viewers now after finishing the fall/spring season in last place among the Big 4 networks. It’s already seen this Cleveland Cavaliers-Golden State Warriors match-up — which proved to be a boon just 12 months ago.

That was up 29 percent from the prior year and 25 percent in the advertiser-sought 18-49 demographic. Back to overall eyeballs, last year’s matchup became the most-watched Finals on ABC since 2003.

To this point in the 52-week season, ABC is down 14 percent year over year in both main metrics versus the 2014-2015 season, per Nielsen’s “most current” ratings, which include seven-day delayed viewing where available. That’s not so good.

Fingers crossed that ABC/Cleveland/Golden State can pull it off again, and possibly even do one game better. TNT just reaped record ratings from Game 7 of the Western Conference Finals — to use a basketball rim pun, the iron is currently hot.

Below are the total viewer counts for ABC’s 2015 NBA Finals, broken down per game. Obviously, the longer a series goes, the better tune-in becomes thanks to heightened drama. So, try not to sweep the Cavs, Splash Brothers. And if it starts to go the other way, ease up, LeBron.

By the way, San Francisco-Oakland-San Jose is the sixth-biggest media market in the United States, Cleveland-Akron is No. 17. Not quite Knicks-Lakers, but not bad.