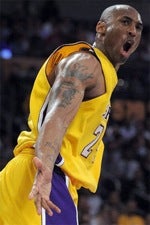 Early ratings from ABC have Thursday’s Game 1 of the NBA Finals at a 4.4 rating and 12 share among the 18-49 adults demo. A leading 10.5 million viewers tuned in overall.

Final numbers will be released later today, but the opener was far and away the best-rated show of the night, with Fox’s "So You Think You Can Dance" (3.1/9) the top-rated show among programming challengers.