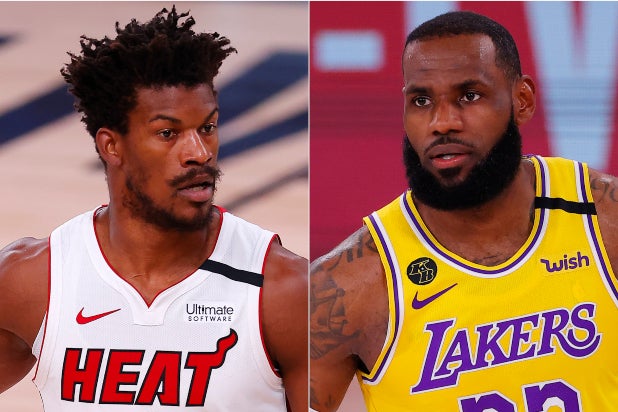 Lakers-Heat will face off against the MLB playoffs and NFL, but ABC will take what it can get

After a one-year absence, LeBron James is back in the NBA Finals, leading the Los Angeles Lakers to a return to the NBA’s title round for the first time in a decade. Yet despite a match-up pitting James against his former team, the Miami Heat, ABC will face its stiffest competition for viewers in its 18 years of airing the finals.

We’ll take that one further: We’ll bet this is the toughest competition the NBA Finals have ever faced in the league’s 74 years of existence.

For starters, the NBA Finals will tip off on Sept. 30, nearly four months later than its normal June timeslot. That’s usually when the league is gearing up for the start of the coming season — for example, the Houston Rockets hosted the Shanghai Sharks on Sept. 30, 2019 in the first exhibition game of the 2019-20 season.

But while the NBA and the recently completed NHL season are ending months later than usual — thanks to a four-month shutdown due to the coronavirus pandemic — other top leagues like Major League Baseball and the NFL are, for the most part, on schedule. That means the NBA Finals will have to contend with the beginning of the expanded MLB playoffs as well as both the 2020 NFL and college football seasons, which likely will fragment the audience far more than usual.

Wednesday’s Game 1 will tip off on a day that has eight MLB playoff games, including separate primetime contests featuring the New York Yankees and Los Angeles Dodgers. The NBA is also scheduled to compete against NBC’s “Sunday Night Football” at least once — twice if the series goes to a Game 6.

Two other challenges are a seemingly unrelenting news cycle regarding the 2020 election — Game 1 tips off one day after the first presidential debate between Donald Trump and Joe Biden — and the still very-much-ongoing coronavirus pandemic. The Finals schedule also includes two games slated for Friday nights (a normal year will typically have one Friday night game), a very TV-unfriendly night.

The NBA is coming off a postseason that not only aired outside its normal window in August and September (compared to April and May) but also, for many games in the first two rounds, outside of primetime. Overall, the Conference Finals on TNT and ESPN/ABC averaged 4.2 million viewers, off 35% from 2019 viewership. The playoffs overall averaged 2.6 million viewers, down 32% when looking at last year’s playoffs. But again, 2020 was anything but normal. For example, some playoff games began at 10:30 a.m. on the West Coast, so comparisons between years are more like apples-to-Fiona Apple.

Even so, NBA games still led in total viewers on 26 of the 35 nights during the playoffs, and 30 of those nights among men aged 18-49, one of the league’s core demos. Viewership on digital platforms was also up double digits.

Despite the lower-than-expected ratings, the NBA Finals still figure to boost ABC, which like most broadcasters has suffered a lack of new scripted programming. Most networks are resorting to a mix of reality and acquired programming while they wait for their regular primetime series to be able to shoot their upcoming seasons; most shows have only been back at work for a few weeks at most. ABC was the only network that was able to stave off “Premiere Week” wreckage last week, but that’s only because it simulcast last Monday’s NFL game on ESPN.

ABC could come close to matching last year’s NBA Finals, when the Toronto Raptors denied an injury-ravaged Golden State Warriors a chance at a three-peat title. The six-game series averaged 15.14 million viewers, its worst performance since 2009 (though that had as much to do with Toronto existing outside of a Nielsen designated market area, and thus, out of ABC’s reach).

Before last season, however, ABC had a strong run courtesy of James making eight consecutive trips, including four that pitted him and his former team, the Cleveland Cavaliers, against the Warriors.

The first three match-ups rank as the three highest-rated and most-watched NBA Finals of the last decade, with two of them — in 2016 and 2017 — surpassing 20 million viewers, which hadn’t happened since Michael Jordan’s heyday. But that rivalry ran out of steam — mostly because the Warriors made it one-sided. The Warriors polished off their second straight title in 2018 with an easy four-game sweep, and viewership dipped accordingly to 17.7 million.

The lowest-rated NBA Finals came in 2007, when a very-young James and the Cavaliers were dominated by the San Antonio Spurs in a four-game sweep. That one-sided matchup drew 9.3 million viewers. It would be a surprise if the 2020 edition fell below that — the Lakers are among the league’s most popular teams.

But even if the NBA Finals are ratings challenged this year, just making it to the finish line in 2020 should be considered a win.