In terms of match-ups, the NBA hasn’t seen this many turkeys in over a decade.

Still, despite the fact that three out of the four of the pro hoops league’s second-round playoff series have been lopsided sweeps, the NBA postseason has managed to continue a three-year run of TV ratings prosperity.
And with matchups for the final two rounds shaping up to be particularly strong (Lakers vs. Celtics, anyone?), the TV numbers could very well end up being record-breakers. 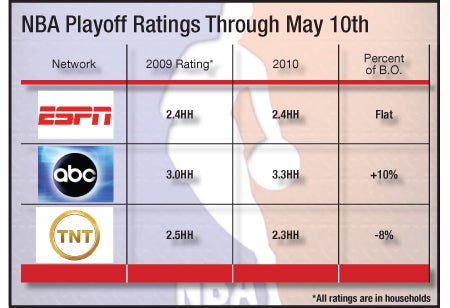 “We’re excited because we know we’re going to get a great Finals,” ESPN senior director of programming Doug White told TheWrap.
TV-wise, pro basketball has displaced major-league baseball as America’s second most popular armchair team sport, behind the all-powerful National Football League, with regular-season viewership averaging around 3.7 million watchers per game this season vs. about 2.7 million for baseball.
Indeed, last year’s dramatic first-round series between the Boston Celtics and Chicago Bulls went all seven games and yielded record first-round TV audiences.
“The longer these series go, the more momentum and audience they gain,” a Turner official said.
ABC, ESPN and ABC – which are paying the NBA about $930 million a year to share domestic broadcast TV and broadband rights through the 2015-16 season – further lucked out in the second round, when the powerful Lakers got sucked into a full seven-game gauntlet by the overmatched Houston Rockets.
By the time all four rounds of 2009 playoffs were completed, all three channels saw their postseason ratings spike double-digits over 2008.
This year, through eight NBA playoff games this year, ABC has seen average viewership spike 9 percent 5 million, with three of its games featuring the league’s biggest draw, the Los Angeles Lakers.
Through 13 games, total viewership is also up 4 percent at sibling cable channel ESPN.
TNT, which is coming off its best postseason in 26 years, is actually down after 32 games, with its average household rating off 8 percent to a 2.3. “All those sweeps are tough,” conceded one Turner network official.
But don’t feel bad for TNT – those numbers are still pretty darned good … and they’ll probably get a lot better.
Coming up, siblings ESPN and ABC will share full third-round coverage of the Eastern Conference Finals, with whoever makes it out alive from the ongoing Cleveland-vs.-Boston series taking on last year’s Finals runner-up, the Orlando Magic.
TNT, meanwhile, will have the Western Conference Finals match-up featuring the Lakers vs. the resurgent Phoenix Suns, a team led by a charismatic star (Steve Nash) and chock-full of compelling human-interest stories.
Both series are predicted to be competitive, and both should yield good TV numbers.
But the real treasure lies ahead for ABC, which has exclusive rights to the NBA championship.
Match-up-wise, there’s really no way ABC can lose.
If the Lakers win out, they’ll either be playing a rematch to either one of their Finals opponents over the last two years (Boston in 2008 and Orlando in 2009).
Or the Lakers and their star, Kobe Bryant could run into what has long been considered the sports-media Holy Grail: a match-up with the Cavaliers and their transmedia/marketing megastar, LeBron James.
“That would be a fantastic series, and not just because its Kobe and LeBron going head to head,” notes ESPN’s White, who handles NBA programming for ABC, too.
Meanwhile, Phoenix “is an exciting team with a great story,” White adds, and ABC would be happy with them in the final round.
“At the end of the day, we’re all going to end up pretty happy,” he said.
Hard to believe, it was just a few years ago that the NBA found itself slipping.
In fact, 2008 was a rebound year for the league’s TV numbers, which had steadily eroded since end of the Golden Age of Michael Jordan in the late ’90s.
The bottoming-out came in the 2007 Finals, when the mid-market San Antonio Spurs swept the Rust Belt-centered Cleveland Cavaliers in a series that averaged less than 10 million viewers a contest.
Going into this year’s playoffs, if you’d told White that all three channels would be nearly flat or better despite a second-round collapse of competition, he might have had trouble believing you.
“Both ESPN and Turner would have loved to have the second round extend out,” he conceded. “And that does impact ratings.”