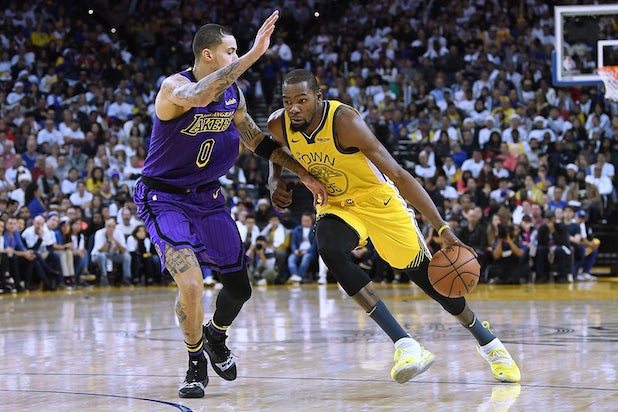 The NBA handed ABC a nice Nielsen ratings present Tuesday night, with its anticipated Christmas Day game between the Los Angeles Lakers and the Golden State Warriors. The holiday matchup easily topped all other primetime broadcast programming — which was mostly comprised of repeats on the other Big 4 networks — in both the all-important adults 18-49 demographic and total viewers for the evening.

The Lakers’ victory over the Warriors is up in preliminary numbers compared to last year’s Christmas Day NBA game on ABC, which was a clash between the Houston Rockets and the Oklahoma City Thunder. This year’s game (which was broadcast on both ABC and ESPN) put up a 2.1 rating and 6.391 million total viewers in preliminary numbers versus last year’s game, which had a 1.8 and 5.463 million.

ABC was first in ratings with a 1.9 rating/8 share in the advertiser-coveted 18-49 demographic and in total viewers with an average of 5.9 million, according to preliminary numbers. The Lakers-Warriors game filled primetime until a sitcom rerun aired at 10:30 p.m.

CBS and Telemundo tied for third in ratings, each with a 0.4/2.

CBS was second in viewers with 3.6 million, airing only reruns.

Univision was fifth in ratings with a 0.3/1 and in viewers with 1 million.

Fox and The CW tied for seventh in ratings, each with a 0.2/1. Both networks filled their primetime blocks with encores.

Also Read: What Happens if CBS Pulls the Plug on Nielsen Ratings

Fox was fourth in viewers with 1.2 million.