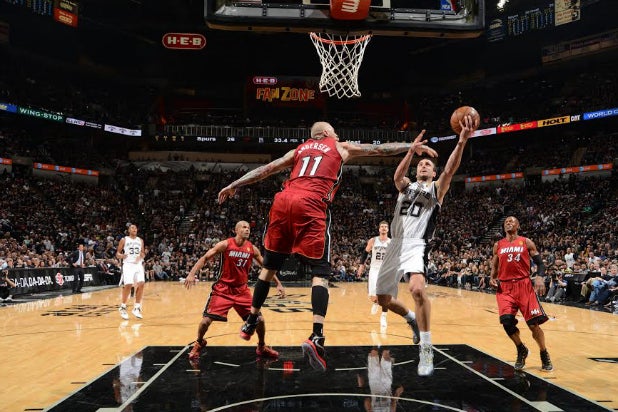 The NBA has renewed its television deals with both Disney and Turner Broadcasting — this time for nine years apiece.

The new agreements may be for more than double the fees the league receives under its current contracts, according to a report in The Wall Street Journal. Turner pays $445 million annually for the league’s broadcast rights, while Disney shells out $485 million a year in the current agreements which expire after the 2015-16 season.

The new deals, which were announced by NBA commissioner Adam Silver and others during a Monday morning press conference, are purportedly more than double those figures, and possibly closer to triple. A representative for ESPN declined to comment, while representatives for Turner and the NBA have not yet respond to TheWrap’s requests on the financial figures.

The agreements also mean that the NBA won’t invite any new rights holders into the fray, either. Fox Sports was interested in getting a piece of the league’s action, but these long-term deals keep the league where it’s at currently on television well into the 2020s.

Under the new contracts, games will continue to air on Turner’s TNT and NBA TV, as well as Disney’s ABC and ESPN, with ABC airing the NBA Finals. The deals, which run through the 2024-25 season, also include streaming rights for ESPN, which will offer regular-season games live.

Additionally in the digital space, Turner lands enhanced rights to league content for Bleacher Report, which it acquired in 2012.

ABC/ESPN will run 100 regular season games now, while Turner gets 64. TNT will also debut the first-ever NBA Awards Show, an annual event which will air at the end of the season. The Atlanta-based cable channel will have expanded activation opportunities surrounding key NBA events such as Opening Night and NBA All-Star Week.

Under a new deal with the WNBA, games will continue to be televised on ABC and ESPN/ESPN2 through the 2025 season. ESPN also will have enhanced in-progress highlight rights for the WNBA on digital and linear platforms.

“The Walt Disney Company and Turner Broadcasting share responsibility for the growing popularity and interest the NBA enjoys, and we are thrilled to extend our partnerships,” said Silver. “With these new agreements, our fans will continue to benefit from the outstanding NBA coverage and programming provided by ABC, ESPN, TNT, NBA TV and their digital platforms.”

“The NBA has never been more popular and it continues to grow under Adam’s leadership,” ESPN President John Skipper added. “By acquiring significantly more NBA content for both existing and yet-to-be created platforms, we will establish a vibrant, year-round NBA presence for fans. For ESPN, this agreement continues our fruitful, longstanding relationship with the NBA and bolsters what is already the sports industry’s most impressive and impactful collection of media rights.”

“This is a significant deal for our company and we are pleased to continue our long-standing partnership with the NBA, its fans, owners and players,” said David Levy, president of Turner Broadcasting System, Inc. “The agreement locks in some of the most valuable, original, premium live sports programming that we’ll continue to monetize across TNT and all other platforms within our extensive portfolio and will help further grow our businesses into the next decade.”