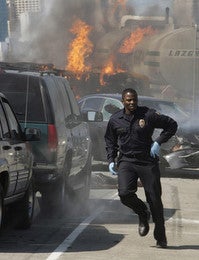 NBC will not extend the order for its rookie emergency first-responders series "Trauma" beyond its current bounty of 13 episodes.

Airing on Monday nights this fall, "Trauma" was one of two new medical dramas launched by NBC this season, this after the network ushered out is longrunning hospital show "ER" last spring.

Last week, NBC announced its decision to re-up the other drama, Thursday night show "Mercy," to a full-season order.

The Peter Berg-produced "Trauma" has been averaging just over 5 million viewers an episode, leading out of "Heroes," which has struggled out of the gate this season. NBC will keep "Trauma" on its Monday-night schedule until episodes 6-13 have aired.

On Wednesday, TheWrap reported that NBC has ordered six additional episodes of "Chuck." That series will likely be plugged into "Trauma’s" 9 p.m. Monday timeslot starting early next year.