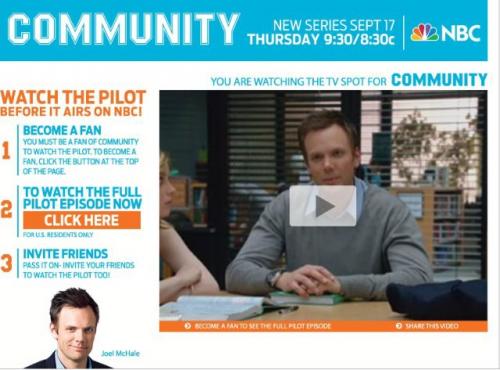 Fox, too, is using sites such as Twitter and Facebook to drum up interest in its new show "Glee," turning fans into pimps for the show.

Potential viewers who become a Facebook fan of "Community" are given access to a clip of the show. If they then agree to then forward the clip to five of their Facebook buddies, NBC lets the user watch the whole pilot.

It’s a twist on previous early screening efforts by the Peacock, which have previously focused on generating mass exposure for pilots. In some years, the network has put all of its shows on NBC.com or video-on-demand platforms weeks before their premieres.

But with online viewing now commonplace, such a strategy carries a risk of being too successful. Networks worry too many viewers might see a show, driving down viewership for the on-air premiere.

A scheme like NBC’s Facebook effort for "Community," however, limits exposure to the pilot — while potentially maximizing the viral buzz around the show. ABC is trying something similar with the pilot for new comedy "Modern Family."

Since beginning the pilot plan, NBC says it’s added more than 20,000 fans to its Facebook page for "Community." Because Facebook says its average user has 120 fans, NBC believes it’s reached over 2.4 million possible viewers with messaging about their friends becoming "Community" fans.

In coming days, NBC says it will step up its Facebook efforts for "Community" by launching a pop culture quiz application and offering more features related to the show on NBC.com.

Not all of NBC’s efforts for "Community" are digital-based, of course.

The network is planning a Sept. 1 screening of the pilot at Los Angeles Community College, where the show frequently shoots. McHale and other cast members will be there, with an audience expected to include bloggers and contest winners.

NBC will screen the show on 20 community college campuses nationwide as well.

The Peacock is hardly the only network unleashing social media marketing.

Fox this week began beta testing for a sweepstakes that asks potential viewers to prove their loyalty to the new comedy-drama "Glee."

Just how does one demonstrate love for the "Glee"? By relentlessly hyping the show to the folks in your various social networks, including Facebook, Twitter, Hulu and MySpace.

Fox will keep track of register fans’ various efforts on behalf of the show and offer up a running tally of which fans have the most points via a leaderboard.

Joe Earley, Fox’s head of marketing, is trying to lead by example. He Tweeted about the competition Aug. 18,  and a check of his profile shows he had already racked up 850 points as of late Tuesday.

Fox is in a unique position to use social media for a new fall show because, unlike most autumn premieres, "Glee" has already been seen by millions of viewers. The show’s pilot aired last spring after "American Idol," creating a small but vocal army of fans of the show.

In addition to giving these early adopters a chance to show off their "Glee" pride, Fox is running a simultaneous contest in which one random "Glee" fan will be flown to Los Angeles for a chance to meet select members of the cast.