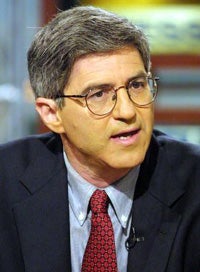 NBC announced on Monday that it has hired Michael Isikoff, a well-regarded investigative journalist, away from Newsweek, a month after the magazine was put up for sale.

Isikoff will report for all platforms, including NBC Nightly News, Today, MSNBC and MSNBC.com, the network said. At Newsweek, Isikoff contributed to DeClassified, a blog with the tagline “Investigative Reporting in Real Time.”

NBC president Steve Capus’ statement on Isikoff: "Michael is one of the most respected and distinguished investigative journalists in the business. I am extremely proud of our investigative team and having Michael join the ranks of Lisa Myers, Chris Hansen and Pete Williams makes our investigative unit the strongest in the industry."

The Newsweek-to-NBC pipeline is used relatively often. Mark Whitaker, the former editor of Newsweek, is now chief of NBC’s Washington Bureau. Jon Meacham, the current editor, is a frequent guest on MSNBC’s “Morning Joe.” Isikoff himself was named an MSNBC contributor in 2009.

And Newsweek and MSNBC have had a long-running digital partnership (remember Newsweek.MSNBC.com?) that began in 2000. Their current pact — renewed in 2009 — runs through mid-2011.