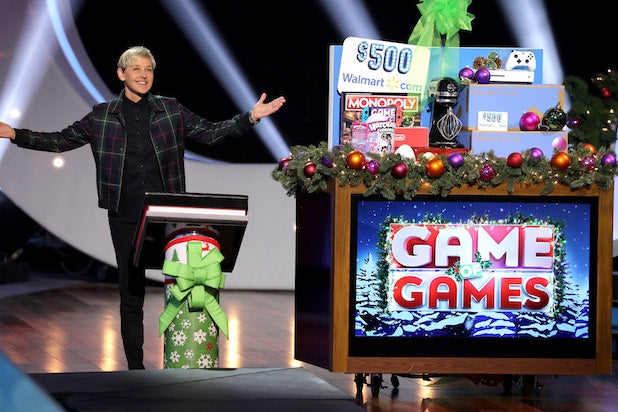 NBC has made a list — and checked it twice — for all of its upcoming holiday specials, and TheWrap has the exclusive details on the broadcaster’s seasonal-programming slate.

The lineup includes annual staples, like the “Macy’s Thanksgiving Day Parade,” a broadcast of “It’s a Wonderful Life,” and the “National Dog Show,” along with new additions like the highly-anticipated “Timeless” series finale, holiday editions of “America’s Got Talent” and “Ellen’s Game of Games,” and a little fun from an “AGT” alum with “Darci Lynne: My Hometown Christmas.”

Also among NBC’s offerings are the previously-announced “A Legendary Christmas with John and Chrissy” (TheWrap has the exclusive details on that too, which you can read about here) and a special episode of “Deal or No Deal,” which will air two days before the series makes its return to television on CNBC.

And for everyone who likes consistency in their Christmas TV programming, viewers will be able to catch two more “Saturday Night Live” holiday specials, the classic Christmas cartoon “How the Grinch Stole Christmas” and the 86th annual New York City tree-lighting will be televised on “Christmas in Rockefeller Center.”

Below is the full slate of NBC holiday specials, which begins on Nov. 21 and ends with the “Tournament of Roses Parade” on Jan. 1, 2019.

With 24 million viewers, last year’s parade was the #3 most-watched entertainment program of the year, behind only the Oscars and the Grammys.

Celebrities will partake in such games as “Block This Way,” “Four-Letter Words,”‘ “Popped Quiz,” “Back to Back” and “7 Seconds of Fame.”

All-things Thanksgiving going back through the 44 seasons of “SNL.”

With 24 million viewers, last year’s parade was the No. 3 most-watched entertainment program of the year, behind only the Oscars and the Grammys.

Averaged 11.6 million viewers last year and 12.3 million the year before, making those the two most-watched telecasts of the “National Dog Show” in the 16 years NBC has covered the event.

Now that the Bergens’ one holiday is gone — and the Trolls don’t have to worry about being eaten by their neighbors — Poppy, the eternally optimistic Troll queen, has made it her mission to bring a brand new day of celebration to Bergen Town.

Also Read: 'This Is Us': Chrissy Metz Says Kate's Pregnancy Leads to Twist You Haven't Seen on Network TV

John Legend and Chrissy Teigen celebrate the season of joy and laughter alongside the couple’s family and talented celebrity friends. Legend performs a selection of songs from his 2018 holiday album, “A Legendary Christmas.”

A trio of dinosaurs need to be moved to a new super-secret exhibit at Jurassic World. However, moving them to the new attraction is not as easy as previously thought.

Howie Mandel’s hit game show is back after 10 years and he’s offering up the possibility of a $1 million holiday present. A family who has overcome all odds, an incredible adoption story and a player who pushes the limits to bring life-changing money home for the holidays. The series premieres Wednesday, Dec. 5 on CNBC.

Winner of the 2017 season of “America’s Got Talent,” Darci Lynne Farmer will celebrate the holidays Oklahoma style with her puppets and guests Kristin Chenoweth, Toby Keith, Hunter Hayes, Pentatonix and Lindsey Stirling.

A holiday edition of last season’s No. 1 new alternative series.

The Steve Harvey-hosted series returns to celebrate the holiday season with fan-favorite acts that include Angelica Hale, Miles Caton and more.

A holiday edition of the No. 1 alternative series on television.

The series finale promises fans an epic, unforgettable thrill ride through the past, present and future, with a healthy dose of Christmas spirit.

Nothing says Christmas like the classic 1947 Jimmy Stewart film from director Frank Capra.

Viewers will be able to watch the Pope Francis-led mass from St. Peter’s Basilica in Rome.

Also Read: 'Brooklyn Nine-Nine': We Finally Have a Premiere Date and Time Slot for NBC's Season 6

The highlights and newsmakers of 2018 are brought to the fore in this year-end review.

Live from Times Square in the heart of New York, the most famous live New Year’s Eve party in America will be a spectacular celebration to wrap up 2018 with show-stopping celebrity guests, unforgettable musical performances and, of course, the heart-pounding, iconic ball drop.