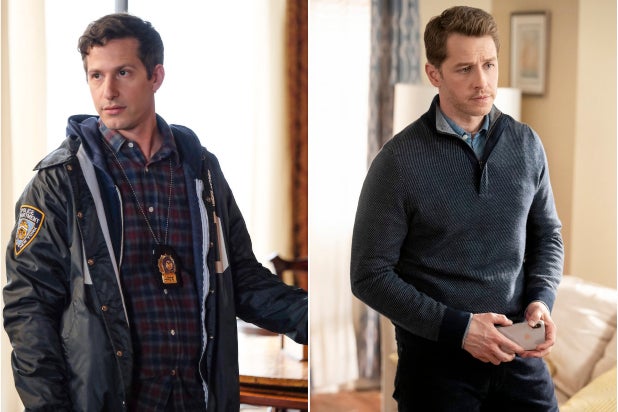 NBC has set its midseason schedule, announcing premiere dates for returning favorites like “Brooklyn Nine-Nine” (which is getting an hour-long Season 7 premiere at 8 p.m. on Feb. 6) and “Manifest” (which is reclaiming its Monday 10 p.m. slot from “Bluff City Law” on Jan. 6) as well as four new series: “Lincoln Rhyme: Hunt for the Bone Collector,” “Zoey’s Extraordinary Playlist,” “Council of Dads” and “Indebted.”

In January, “America’s Got Talent: The Champions” will settle in on Mondays at 8 p.m., with “Manifest” set to follow at 10 p.m., the time currently occupied by the first season of legal drama “Bluff City Law,” which didn’t receive an additional episode order. Come February, “The Voice” Season 18 (featuring new coach Nick Jonas) will take over the “AGT: The Champions” slot and once again become “Manifest’s” lead-in, as it was in Fall 2018.

Also Read: 'Good Place' to Get Extended Series Finale and a Seth Meyers-Hosted After Show

On Tuesdays, “Ellen’s Game of Games” will air in the 8 o’clock hour. “This Is Us” will hold on to 9 p.m. until its Season 4 finale in March, at which time new drama “Council of Dads” will take over its slot. “New Amsterdam” is sticking at 10 p.m., except for the final two weeks of “This Is Us,” when the medical drama will give up its lead-out shift to the first two episodes of “Council of Dads.”

Thursdays will see the biggest shakeup starting in February, thanks to the end of “The Good Place” and the first season of “Perfect Harmony,” which has not received a backorder of episodes from NBC. “Superstore” will lose its 8 p.m. slot to “Brooklyn Nine-Nine’s” hour-long series premiere on Feb. 6, but returns to 8 o’clock the following week, when the 99th precinct moves to its new home at 8:30 p.m. (a time previously held by “Perfect Harmony”). “Will & Grace” will take “The Good Place’s” 9 p.m. slot after the Kristen Bell-led comedy airs its extended series finale Jan. 30. New comedy “Indebted” is going to fill the 9:30 p.m. spot and “Law & Order: SVU” will still air at 10 p.m.

On Fridays, the first season of new drama “Lincoln Rhyme: Hunt for the Bone Collector” will premiere Jan. 10 and air for 10 weeks straight at 8 p.m. and conclude in time to allow “The Blacklist” to come back and finish up its seventh season.

In March, Sundays will be stacked with “Little Big Shots” at 8 p.m., musical drama “Zoey’s Extraordinary Playlist” at 9 p.m. (which will have a preview on Tuesday, Jan. 7 before shifting to Sundays on Feb. 16), and a new season of “Good Girls” at 10 p.m.

“As we head into the new year, we’re using six-weeks of jam-packed original holiday programming to build momentum towards our January and spring launches,” said Paul Telegdy, chairman, NBC Entertainment. “Success starts with our carefully curated linear schedule, and from there we harness the power of our growing digital audience. This multi-platform strategy is a driving force as we head into the next phase of the season with a crop of shows that are primed to continue in the great NBC tradition of capturing the heart of pop-culture.”

Absent from NBC’s winter programming list are the final season of “Blindspot” and upcoming sitcom “The Kenan Show,” starring Kenan Thompson. An individual with knowledge of the network’s scheduling tells TheWrap both shows are currently eyeing summer premiere dates.

See NBC’s midseason schedule below. New shows are noted in ALL CAPS.

Also Read: 'This Is Us' Star Sterling K Brown on Deja and Malik's Future, Jack's 'Exploration' of Randall's Race

See the official descriptions for the new series below, each in the network’s own words.

Family takes on a different meaning in this transformative and inspirational new drama when Scott Perry, a loving father of five, has his entire life’s plan thrown into upheaval by an unexpected health scare. He calls on a few of his most trusted friends to step in as back-up dads to help guide and support his growing family – just in case he ever can’t be there to do it himself. There’s Anthony, Scott’s oldest and most loyal friend; Larry, his tough-love AA sponsee; and Oliver, his dedicated doctor and wife’s dearest friend. Together, they discover that there’s more to being a father than anyone could do alone – and more to being a family than they ever thought possible.

The show is inspired by best-selling author Bruce Feiler’s book “Council of Dads.”

“Council of Dads” is produced by Universal Television in association with Jerry Bruckheimer Television and Midwest Livestock Productions.

Inspired by the best-selling book, the enigmatic and notorious serial killer known only as “The Bone Collector” once terrified New York City … until he seemingly disappeared. Now, three years later, when an elaborate murder points to his return, it brings former NYPD detective and forensic genius Lincoln Rhyme out of retirement and back into the fold. Rhyme has a personal connection to the case – a trap set by the killer left him paralyzed – but this time he’s teaming up with Amelia Sachs, an intuitive young officer who’s got her own gift for proﬁling. This unlikely detective duo will play a deadly new game of cat and mouse with the brilliant psychopath who brought them together. But how do you catch a killer who always seems to be one step ahead?

“Lincoln Rhyme: Hunt for the Bone Collector” is produced by Universal Television and Sony Pictures Television and in association with Keshet Studios.

If there’s a song in your heart, it will get in her head. Jane Levy stars in this high-concept drama as Zoey Clarke, a whip-smart computer coder forging her way in San Francisco. After an unusual event, Zoey, who always preferred podcasts over pop songs, suddenly starts to hear the innermost wants, thoughts and desires of the people around her – her family, co-workers and complete strangers – through popular songs. At first, she questions her own sanity, but after getting some guidance from her musically adept neighbor, Mo, and making a breakthrough with her ailing father, Zoey soon realizes this unwanted curse may just be an incredibly wonderful gift as she connects with the world like never before.

“Zoey’s Extraordinary Playlist” is produced by Lionsgate and Universal Television in association with the Tannenbaum Company, Feigco Entertainment and Universal Music Group’s Polygram.

Young parents Dave and Rebecca are ready to reclaim their life after years of diapers and sleepless nights. However, things take an unexpected turn when Dave’s parents show up unannounced and broke, leaving Dave with no choice but to open the door to the two people who gave him everything. But these boomerang parents aren’t great with boundaries and the question of who’s parenting who quickly becomes blurred.

“Indebted” is a co-production between by Sony Pictures Television and Universal Television in association with Doug Robinson Productions.

Emmy Award-winning and Oscar-nominated actress, comedian and producer Melissa McCarthy joins as the new host of “Little Big Shots,” from executive producer Ellen DeGeneres, for an all-new and totally reinvented season. Melissa introduces us to a new generation of amazing kids from the U.S. and beyond, all of whom will show off the surprising, smart, funny and downright awesome things they can do. From brainy little whiz kids to mini virtuosos, it’s going to be an exciting, inspiring and adorable time for all. And with the invincible pairing of Ellen and Melissa, two of the funniest and most talented women in Hollywood at the helm, kids who defy the odds, reject stereotypes and conquer their dreams will give us a peek at what today’s cutest – and tomorrow’s biggest – talents look like!

The series is produced by Warner Horizon Unscripted Television in association with East 112th Street Productions, A Very Good Production and On the Day Productions.