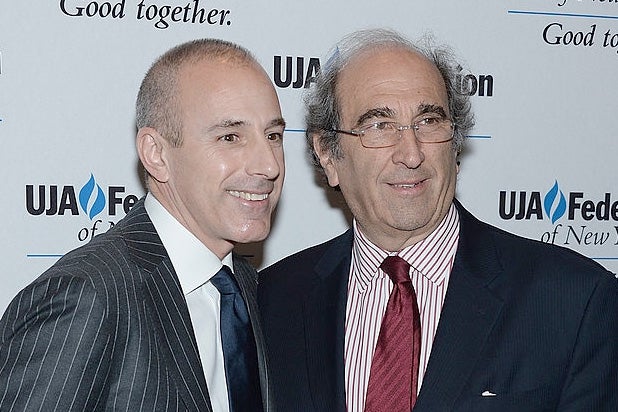 “The last few months have been extraordinarily difficult, with our dedicated journalists doing some of our best work ever while we endured a painful period in the spotlight including a thorough and deserved examination,” said Lack.

“This has been felt by everyone in the organization, most importantly several of our colleagues who were deeply affected. I admire their bravery and am profoundly grateful for their candor.”

In addition to those thoughts, Lack offered a list of seven steps the company would implement to make sure that harassment would not be allowed to thrive at NBC News in the future. Some of the steps cited were a “deeper focus on training managers,” a “new outside option to raise concerns” and a “new inside path to raise concerns.”

The investigation, conducted by the networks in-house legal team completely exonerated NBC News and MSNBC management in the Lauer scandal, specifically reporting that executives and human resources had no knowledge of his transgressions before November 27, 2017.

As you know, the NBCUniversal team has completed its investigation stemming from the Matt Lauer matter. By now you should have received a summary of the findings and recommendations from Kim Harris, General Counsel of NBCU.

The last few months have been extraordinarily difficult, with our dedicated journalists doing some of our best work ever while we endured a painful period in the spotlight including a thorough and deserved examination. This has been felt by everyone in the organization, most importantly several of our colleagues who were deeply affected. I admire their bravery and am profoundly grateful for their candor.

When we first told you about the decision to dismiss Matt Lauer, I said we had been presented with “reason to believe this may not have been an isolated incident.” As you will see in the report, that turned out to be the case.

You will also see the detailed findings and conclusions resulting from nearly 70 interviews with current and former employees and over 30 focus groups with 262 current employees. The review, of course, focused specifically on sexual harassment, but it also broadened the lens – through the culture assessment – to examine other inappropriate workplace behavior like bullying.

The goal of the NBCU investigation was to understand what happened, and as importantly, determine what steps we can take to build a culture of genuinely greater transparency, openness and respect for each other – where everyone feels safe and comfortable at all times.

Like many of you, I am immensely proud of NBC News, its history, and the work we do. But – stepping back from the investigation – that history also includes a time when people were not comfortable coming forward to voice complaints about repugnant behavior. That is not acceptable.

We cannot change the past. What we can do is learn from it, and try to make it right. We have already begun to turn the page to establish a safer and more respectful environment. That requires strong, specific steps in a sustained manner to transform the culture. Here is the plan.

1. New outside option to raise concerns: In addition to the existing four routes to raise concerns (here), which remain valuable resources for you, we are adding more. You will be able to go directly to Seyfarth Shaw, the law firm connected to our in-person trainers, to lodge a complaint about workplace behavior in the news division. They will operate outside the traditional News Human Resources structure, bringing your concerns directly to the NBCUniversal legal team, and will work with you to navigate the investigation process.

2. New inside path to raise concerns: There will be a unique independent team of employee counselors staffed with expertise in managing employee concerns. This team will also operate separately from NBC News Human Resources and the managers of our divisions – they will report in to NBCUniversal’s legal team. Their primary mission will be to address complaints while emphasizing confidentiality.

3. More information to complainants after they report: One of the findings of the culture assessment is that some employees quite understandably feel that after they gather the courage to raise a concern they do not get enough information about how it is being addressed. We are going to inject more immediacy and measurable transparency into the process of raising and resolving concerns. NBCU will shortly be sharing a revised company-wide policy that will, among other things, lay out in clear terms what happens when you raise concerns and what you can expect from the process.

4. Deeper focus on training managers: We are going to undergo a “training surge” for manager-level employees to better equip each and every one of them to build trust and positive team dynamics, model appropriate behavior for others, and create respectful environments.

5. Respectful behavior now a regular part of performance evaluations: Colleagues should treat each other well because it is ingrained in the culture and the right thing to do. From here forward our annual performance reviews will include greater emphasis on each manager’s workplace behavior as well as the environment they create.

7. Constant vigilance, monitoring and measuring progress around culture changes: Our commitment to change and progress must be sustained and lasting. To that end, we will conduct confidential focus group-style assessments of our culture to track progress and continue understanding how we can improve it. Over the next 18 months we will also conduct multiple anonymous ‘pulse’ surveys to assess progress.

You must have a workplace culture that is as great as the work you are doing every day. But this isn’t a one-way process. It takes all 2,145 of us together, having each other’s backs to make this goal a reality that starts now.