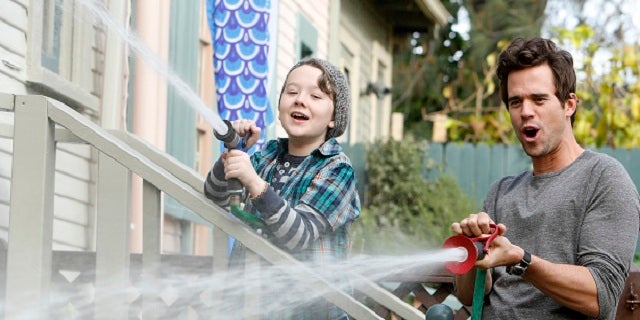 On Wednesday, NBC handed out several pilot passes, declining to pick up the high-profile "Hatfields & McCoys," "Bloodline" and five other pilots. (The network also axed its freshman drama "Deception.") Now it's time to fire up the greenlights.

The network picked up a number of pilots Thursday, including "About a Boy" and "Crisis," an individual familiar with the pickups told TheWrap.

The comedy "About a Boy," based on the Nick Hornby novel, follows a single guy primary goal in life is avoiding responsibility – until he accidentally befriends the young boy and his needy single mom who live next door.

The drama "Crisis," meanwhile comes from Rand Ravich ("Life"), who's writing and executive producing. Dermot Mulroney, Rachael Taylor and Gillian Anderson star in the series, which chronicles some of the most powerful players in Washington and Corporate America as they're pulled into a chilling international conspiracy when a disgruntled CIA agent threatens what they all hold most dear: their children.

Far Shariat is also executive producing, as is Phillip Noyce ("Salt"), who directed the pilot as well.

Among the other pilot pickups, the drama "Believe," which comes from Alfonso Cuaron and Mark Friedman, centers on a young girl with supernatural powers who's on the run from dark forces who changes the lives of the people she encounters while being protected by an unlikely guardian who was given a reprieve from death row.

J.J. Abrams and Bryan Burk are also executive producing the series, which is produced by Bad Robot Productions and Warner Bros. Television.

"Will & Grace" veteran Sean Hayes stars in "Sean Saves the World," about a divorced gay father who juggles his career, his employees, his pushy mother ("Alice" star Linda Lavin) and his teenage daughter (played by Sami Isler), who moves in with him full-time. Hayes is executive producing, as is his "Hot in Cleveland" cohort Todd Milliner, James Burrows (who directed the pilot) and Victor Fresco (who handled writing duties). Universal Television and Hazy Mills Productions are producing.

The comedy "The Family Guide" stars Parker Posey and "Law & Order" alum J.K. Simmons, looks at how a couple's breakup affects the family, which also includes a son and daughter.

"Arrested Development" star Jason Bateman is providing voiceover narrative for the series and is also among the show's executive producers, along with D.J. Nash ("Up All Night") and Jim Garavente. "Friends"-ter David Schwimmer directed the pilot for the project, which is produced by Universal Television and Aggregate Films.