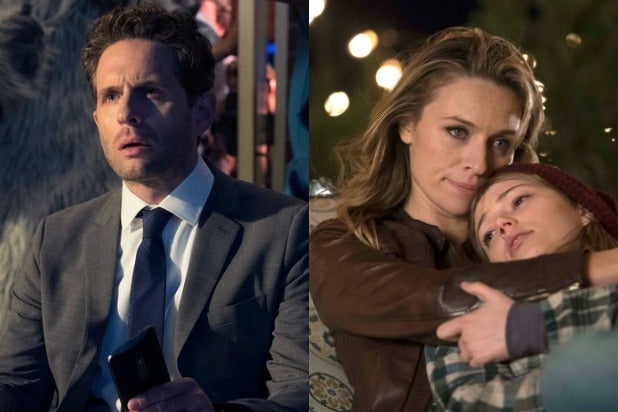 NBC is rounding out its midseason programming slate, setting premiere dates for new seasons of “Good Girls” and Glenn Howerton’s “A.P. Bio.” and launch dates for freshman series “The Enemy Within” and “The Village.” The broadcaster has also locked in starts for John Legend’s first season coaching on “The Voice” — while revealing it will be cutting down on Tuesday installments of the singing competition series next year — and the third season of Jennifer Lopez’s “World of Dance.”

The Christina Hendricks, Retta, and Mae Whitman-led drama “Good Girls” will return with Season 2 on Sunday, March 3 at 10 p.m. Per the official description, this year is “all about women dealing with the consequences of their criminal behavior” and “life-changing consequences” for Beth, Ruby and Annie.

The second season of comedy “A.P. Bio” premieres Thursday, March 7 at 8:30 p.m., bringing you back into the world of disgraced-Harvard-philosophy-professor-turned-Toledo-high-school-teacher, Jack Griffin (Howerton).

“The Voice” will launch its sixteenth season — featuring coaches Kelly Clarkson, Adam Levine, Blake Shelton and first-timer John Legend, with Carson Daly returning as host — with a two-night premiere Monday, Feb. 25 at 8 p.m. and Tuesday, Feb 26 at 8 p.m. After its next Tuesday show on March 5, “The Voice” will go idle on that night until April 23, skipping six weeks’ worth of Tuesday shows.

Adding to the competitive winter fun is Season 3 of former summer series “World of Dance,” which will debut Tuesday, Feb. 26 at 9 p.m. with judges Jennifer Lopez, Derek Hough, Ne-Yo and host Scott Evans. The series will shift to its regular time slot at 8 p.m. on Sunday, March 3.

As for the new series on the block, spy-hunting thriller “The Enemy Within” will make its debut Monday, Feb. 25, while drama “The Village” will kick off Tuesday, March 12, both in the 10 o’clock hour, with the latter show moving into the 9 p.m. slot on April 2.

“The Enemy Within” is centered around Erica Shepherd (Jennifer Carpenter), a brilliant former CIA operative, now known as the most notorious traitor in American history serving life in a Supermax prison. Against every fiber of his being but with nowhere else to turn, FBI agent Will Keaton (Morris Chestnut) enlists Shepherd to help track down a fiercely dangerous and elusive criminal she knows all too well. For Keaton, it’s not easy to trust the woman who cost him so much. While Shepherd and Keaton have different motivations for bringing the enemy to justice, they both know that to catch a spy… they must think like one.

Here’s the official logline for “The Village”: Welcome to the Village, an apartment building in Brooklyn that appears like any other from the outside but is quite unique inside. The people who reside here have built a bonded family of friends and neighbors. Sarah’s a nurse and single mom raising a creative teen; Gabe’s a young law student who got a much older and unexpected roommate; Ava must secure the future of her young, U.S.-born son when ICE comes knocking; Nick’s a veteran who’s returned from war; and the heart and soul of the building, Ron and Patricia, have captivating tales all their own. These are the hopeful, heartwarming and challenging stories of life that prove family is everything — even if it’s the one you make with the people around you.