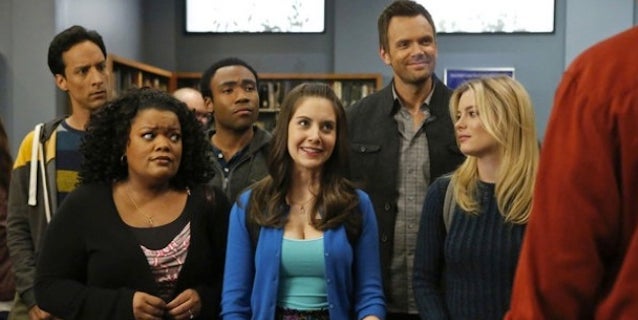 NBC has renewed "Community" for Season 5, while picking up three new series: "Blacklist," "Night Shift," and "Welcome to the Family."

"The Blacklist," a drama starring James Spader, follows the world's most wanted criminal working with a newly minted FBI agent after turning himself in and agreeing to give up all of his criminal accomplices. Jon Bokenkamp, who produces with John Eisendrath, John Fox and John Davis, wrote the pilot from Sony and Davis Entertainment.

"Night Shift," formerly titled "After Hours," is a medical drama taking place during a San Antonio hospital' night shift. Freddy Rodriguez, Eoin Macken, Jeananne Goossen and Brendan Fehr are among the actors portraying the irreverent doctors who bring humor and energy to the chaotic Level One Trauma Center, a hot zone for the worst and the weirdest cases.

Gabe Sachs and Jeff Judah wrote the pilot, and produced with director Pierre Morel for Sony.

"Welcome to the Family," a single-camera comedy from Sony, follows a white and Latino family who are bonded together by their children's unplanned pregnancy. Mike O'Malley, Mary McCormack and Richardo Chavira star in the new series written and executive produced by Mike Sikowitz ("Rules of Engagement").

See below for official descriptions of the pilot pick ups:

For decades, ex-government agent Raymond “Red” Reddington (James Spader, “The Office,” “Boston Legal”) has been one of the FBI’s Most Wanted fugitives. Brokering shadowy deals for criminals across the globe, Red was known by many as “The Concierge of Crime.” Now, he’s mysteriously surrendered to the FBI with an explosive offer: He will help catch a long-thought-dead terrorist, Ranko Zamani, under the condition that he speaks only to Elizabeth “Liz” Keen (Megan Boone, “Law & Order: Los Angeles”), an FBI profiler fresh out of Quantico. For Liz, it’s going to be one hell of a first day on the job. What follows is a twisting series of events as the race to stop a terrorist begins. What are Red’s true intentions? Why has he chosen Liz, a woman with whom he seemingly has no connection? Does Liz have secrets of her own? Zamani, we come to find out, is only the first of many on a list that Red has compiled over the years: a “blacklist” of politicians, mobsters, spies and international terrorists. He will help catch them all… with the caveat that Liz continues to work as his partner. Red will teach Liz to think like a criminal and “see the bigger picture”… whether she wants to or not. Also starring are Diego Klattenhoff (“Homeland”), Harry Lennix (“Man of Steel”), Ryan Eggold (“90210”) and Ilfenesh Hadera (“Da Brick”). From writer/executive producer Jon Bokenkamp (“The Call,” “Taking Lives”) and executive producers John Eisendrath (“Alias”), John Davis (“Gulliver’s Travels,” “Predator”) and John Fox, this global thriller will become more mysterious with each name on the list. The pilot was directed by Joe Carnahan (“The A-Team,” “The Grey”). “The Blacklist” is a production of Sony Pictures Television and Davis Entertainment.

Welcome to the night shift, where every day is a fight between the heroic efforts of saving lives and the hard truths of running a hospital. At San Antonio Memorial, the men and women who work the wee hours are a special breed, particularly adrenaline junkie T.C. Callahan (Eoin Macken, “Merlin”). After a grueling tour of duty in the Middle East, T.C. is about to learn that his toughest battles will be fought right at home. He and his irreverent team of late-night docs, including Topher (Ken Leung, “Lost”) and Drew (Brendan Fehr, “Roswell”), know how to let off steam with the casual prank or two, but when lives are at stake they are all business. Unfortunately, the night shift is now under new management and boss Michael Ragosa (Freddy Rodriguez, “Six Feet Under”) is more interested in cutting costs than helping people. But T.C. has never met a rule he couldn’t break, or a person he won’t stand up to. And it’s clear that not even Dr. Jordan Santos (Jill Flint, “The Good Wife”), T.C.’s ex-girlfriend and now Ragosa’s second in charge, has a chance at keeping him in line. If Ragosa wants a war, he’ll get one. Gabe Sachs and Jeff Judah (“Diary of a Wimpy Kid,” “Freaks and Geeks”) and Pierre Morel (“Taken”) serve as executive producers. “Night Shift” is a production of Sony Pictures Television.

“WELCOME TO THE FAMILY”

Think culture clash… actually, this is more like culture crash; for parents Dan Yoder (Mike O’Malley, “Glee,” “My Name Is Earl”) and wife Karina (Mary McCormack, “In Plain Sight,” “The West Wing”) who have struggled all their lives, on the day their daughter Molly (Ella Rae Peck, (“Deception,” “Gossip Girl”) graduates from high school with an acceptance to college locked up, they also find out she is knocked up! But that’s only half the story. Across town in East L.A., Junior Hernandez (Joseph Haro, “Glee,” “Awkward”), in the middle of his high school valedictorian speech, gets a text from girlfriend Molly that he’s going to be a daddy. Expectedly, Junior’s parents Miguel (Ricardo Chavira, “Desperate Housewives”) and Lisette (Justina Machado, “Six Feet Under,” “ER”) are also upset, as they now have Caucasians in the family! What follows is a crash course in culture blending as Molly and Junior decide they want to get married and, in doing so, bring together two very different families, which includes Junior’s younger brother, Demetrio (Aramis Knight, “General Hospital,” “Parenthood”). The dads have the most difficult time reconciling while the moms take a softer approach to get to know one another. When the parents fully realize that their kids are serious about making a life together, the adults exhale and begin to come to terms with this new blended family that is being formed and start to understand that it will take, humor, love and tolerance to make it all work. From writer and executive producer Mike Sikowitz (“Rules of Engagement,” “Friends”) comes a comedy that proves, life is full of unexpected little bumps – and some big ones too. Jamie Tarses also serves as executive producer (“Happy Endings, “Franklin & Bash”). The pilot was directed by Michael Engler (“Privileged,” “Psych”). “Welcome to the Family” is a production of Sony Pictures Television and FanFare Productions.