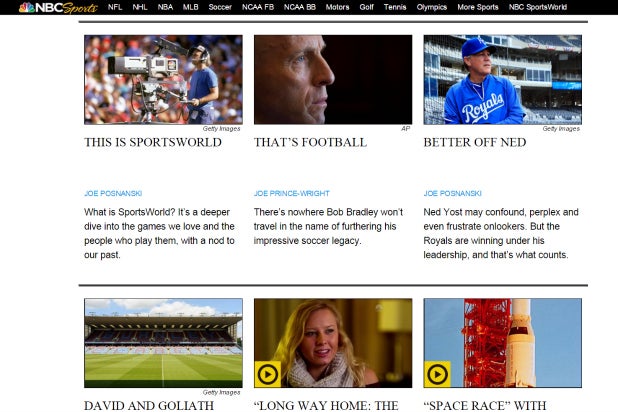 The new site, which will housed inside of NBCSports.com, will also include essays, short films and documentaries — as well as years of archived Olympic video.

See photos: Celebrating NBA Finals With 12 of the Most Dramatic Moments in Sport Movies (Photos)

Named after an NBC Sports’ TV show from the 1980s, NBC SportsWorld will be the home of long-form pieces from former Sports Illustrated columnist Joe Posnanski, as well as Joe Prince-Wright of ProSoccerTalk, and Nick Zaccardi of OlympicTalk. Additional contributions to the new digital destination will come from writers at affiliated properties, including CSN Bay Area’s Ray Ratto, GolfChannel.com’s Rex Hoggard, Randall Mell and Jason Sobel, and RotoWorld.

On the video end, documentary “Nancy & Tonya” — in which Mary Carillo looks back at the events surrounding the 1994 Olympic Winter Games, and has a sit-down with Nancy Kerrigan and a one-on-one interview with Tonya Harding — will be available. Joining that doc on Day 1 are “Lokomotiv” and “Long Way Home,” as well as golf films “Arnie” and “Payne.”

“NBC SportsWorld will create an immersive experience for our users with deep, thoughtful multimedia pieces written and produced by our talented roster of contributors from all facets of the NBC Sports Group.”