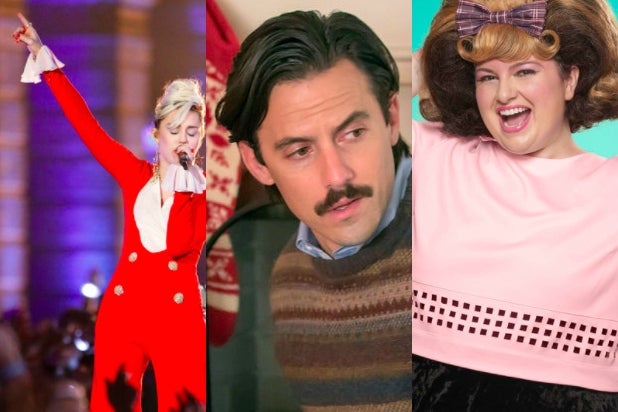 NBC is already having a Merry Christmas and a Happy Hanukah — really, it’s just been a fantastic fall and winter overall.

That’s because the first-place broadcaster has amassed the largest lead at this point in the season for any network in 19 years. NBC’s 23 percent margin over second place Fox — a 2.7 versus a 2.2 in primetime — is the biggest lead since 1997, when the peacock network was up 28 percent compared to its closest competitor.

“This Is Us,” “Hairspray Live,” “The Voice,” “Dolly Parton’s Christmas of Many Colors,” and NFL football have given the Bob Greenblatt-led broadcast channel one hell of a good fourth quarter. When Q4 officially closes in a week-and-a-half, NBC will have won the key 18-49 demographic for five years in a row. That hasn’t happened on broadcast for 13 years.

By the way, lest anyone write this claim off as the result of getting some “Thursday Night Football” rights this season, NBC still would have won the main demo outright over Q4. And that’s the first time the net can say that since 20o3 — that’s 13 years again.

Here’s how the broadcasters rank among those favored by advertisers in the core demographic:

All numbers in this story come from Nielsen’s “most current” demographic, which counts a week’s worth of delayed viewing where available.

Despite all the strong NBC momentum, CBS will still close the quarter — and thus, season-to-date — No. 1 in total viewers. That said, it’s pretty close — the tightest between those two channels in 14 years.

Here are those total viewers rankings:

By the way, if you’re wondering why Fox is doing so well, Google “2016 World Series TV Ratings.” We’d appreciate if you added “+ TheWrap” to that search criteria.

NBC drama’s got great pedigree and ‘The Voice’ lead-in, sure, but there’s considerably more to it than that

"This Is Us" is fall TV's biggest freshman hit -- and it's really not all that close. The one-hour show premiered as NBC's most-watched scripted series in the time period in 7 years. It hasn't slowed down since then -- click through the slideshow to find out why.

Also Read: ‘This Is Us': The Biggest Tearjerker Moments So Far (Photos)