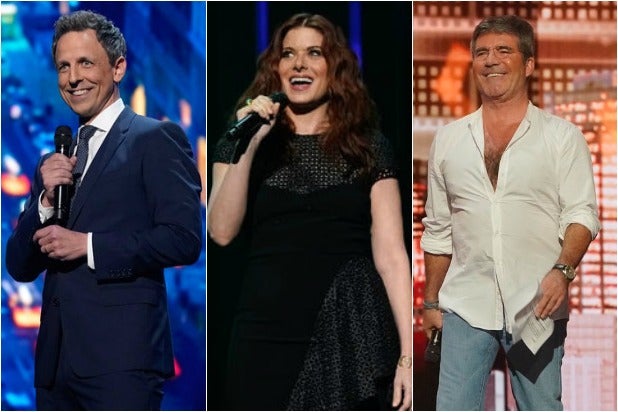 The 2018 broadcast upfronts are officially upon us, and NBC just wrapped its big Radio City Music Hall sales pitch to potential advertisers. There was a little something for everyone — especially if you’re between the ages of 18 and 49.

NBCUniversal began its annual event with a star-studded musical parody. Unfortunately, not everybody (TheWrap included) got to see it from never-ending line down 50th Street. More on that in a bit.

The suite of networks spent the next 120 minutes or so showing off new series like “Abby’s” (pictured above) “New Amsterdam,” “The Titan Games,” “Deadly Class,” “Treadstone,” and “Very Cavallari,” to name just a handful.

Read on below for 9 things we observed from the beginning of a very long week in New York City.

Also Read: Ratings: 'Timeless' Rises in Season 2 Finale - But Is It Enough to Save NBC Series?

Blurred Lines
The long, snaking line to enter NBC’s upfront was a disaster this year. This reporter showed up around 10 a.m., which should have afforded plenty of time to get in and comfy for the 10:30 event, but many of us didn’t even enter the building until about 45 minutes later.

All of that line-cutting straight out of 30 Rock certainly didn’t help — but that sort if thing is to be expected in this business, we suppose.

U.S.A.! U.S.A.! U.S.A.!
TheWrap found its seat in time to see the gold medal-winning U.S. Women’s Hockey Team rise from a hydraulic platform beneath the stage.

Yes, the PyeongChang champs got both the pageantry and the standing ovation they deserved — it would be the only such upright applause of the morning. (To be fair, a standing O is not a standard response for performances — but patriotism changes everything.)

Warm Open
The Peacock opened its upfront presentation Monday with a pre-taped sketch of NBC stars like Kristen Bell, Sean Hayes, Jimmy Fallon, Ted Danson and (as much as they tried to stop her) Debra Messing singing a parody song about the dog and pony show, set to “Mamma Mia!”

It was a decent-enough bit that CEO Steve Burke admitted was some “shameless self promotion” for the upcoming Universal Pictures sequel. Burke then got right down to rattling off all the reasons why the network and its studio are still No. 1, including its ratings, the Olympics, and how prepared NBC is for the changing landscape of broadcast TV.

Wristbands Not Explained to Half of Us
We were all given digital wristbands upon entering the aforementioned terrible line. Apparently, they were used to vote on a choosing a new televised category for the upcoming People’s Choice Awards.

Unfortunately, a number of us were never told that nor asked to vote. NBC probably gave up on that notion at 10:30 a.m. when the show was supposed to start and half their audience was still on 50th Street.

Those actually connected to whatever scary tech this was saw their bracelets alternate light-up colors as an interactive(ish) part of the rest of the program. Ours just sat there on our wrists, (appropriately) dead.

“Happy” Was Kinda Sad
Though the Syfy series “Happy’s” animated pre-taped bit fell a bit flat (it wasn’t bad, just maybe not for this audience), stars Chris Meloni and Patton Oswalt were well-received by the media buyers and advertisers in attendance.

After the comic called out his actor friend for a particularly rough teleprompter read, the good sport Meloni’s face glowed redder than the upholstered Radio City Music Hall seat cushions.

Also Read: 'Brooklyn Nine-Nine' Season 6: Fans Will Have to Wait Until Midseason for NBC Premiere

“Late Night,” Early Morning
The crowd at Radio City Musical Hall was anything but tough when “Late Night” host Seth Meyers took the stage to deliver a monologue filled with cracks about the Peacock.

The quips included references to the network’s 11th hour “Brooklyn Nine-Nine” pickup one day after its Fox cancellation. (“I have to say, for NBC this upfronts week got off to a dramatic start when NBC picked up ‘Brooklyn Nine-Nine’ after Fox canceled it. Yeah, fantastic news for a great show. But it still feels a little bit like NBC is Fox’s deadbeat friend. ‘Hey, uh, you gonna finish that? Can I have it?'”) Meyers also referenced the recently released report about NBCU’s investigation into ousted “Today” show host Matt Lauer. (“It’s not surprising for NBC to be dramatic, we are home to the No. 1 drama on television. A show that each week gives us twists and turns, heartbreaking reveals, and this season the departure of a once-beloved character. I’m talking of course of, ‘This Is the Today Show.'”)

Get even more punchlines here.

First Upfront, Simon?
“America’s Got Talent” reigning champion Darci Lynne Farmer brought out her Simon Cowell puppet for a short (non-singing) ventriloquism skit, which was used to intro the real-life Cowell. The “American Idol” alum lingered on stage for way too long and fell flat in his presentation — though he did deliver a solid Paula Abdul joke early on.

Each of the show’s judges got their turn on stage, with Jennifer Lopez headlining the extended routine and landing the biggest reaction from those in attendance (who hadn’t walked out yet to save their ears). Yes, J. Lo’s reception was even bigger than the one for a shirtless Derek Hough.

We suppose that was nice and all, but c’mon man: Ronda Rousey made it.

Also Read: Simon Cowell to Bring 'America's Got Talent: The Champions' Edition to NBC This Winter

Check back with TheWrap soon for more upfronts news, including Fox’s pitch from the Beacon Theater.