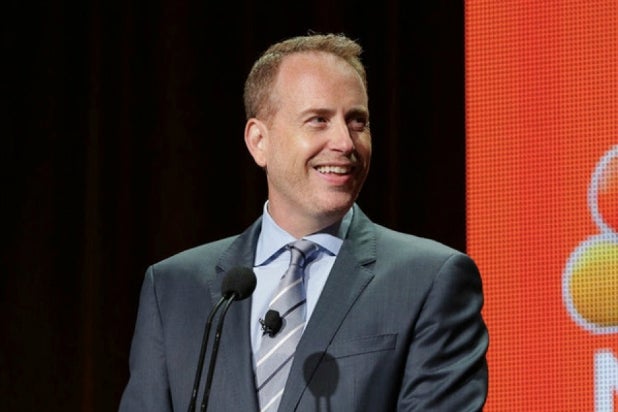 “Who has the first Donald Trump question?” Greenblatt joked as he began the Q&A portion of his appearance Thursday at the Beverly Hilton. A question about Trump — the presidential candidate and former host of “The Celebrity Apprentice” who NBC cut ties with following his controversial remarks about Mexican immigrants this summer — followed immediately.

Asked whether NBC had essentially blackballed Trump or whether he would be able to engage with the network to do things such as buy campaign ads on the broadcaster’s air, Greenblatt responded, “I don’t think someone who is running for president and might possibly be the leader of the free world could be banned from any activities at NBC.”

“I guess people are looking for someone who speaks their mind … and he does that,” he said of Trump. “Whether you agree with anything he says, he says it without any filter. … I think there’s something refreshing about that.”

He added, “I do believe that at some point you also have to look at the message. The world likes a star, and he’s a star.”

Asked whether there was any possibility that Trump could return as host of “Celebrity Apprentice,” which is now set to come back in the 2016-17 season, Greenblatt said, “Absolutely not.”

The NBC chief, joined onstage by NBC Entertainment president Jennifer Salke, also spoke at length about comedy and the trouble that the network has had in establishing sitcoms. Asked about Emmy-nominated “Unbreakable Kimmy Schmidt,” which is produced by NBC’s studio arm Universal Television, and which went to Netflix after originally being picked up by NBC, Greenblatt joked, “We’re whores for Emmy nominations just like anybody else.” He added, “We would love to be able to claim those nominations for NBC… We wanted to put that show in the place where it would have the best chance for success. We thought the Netflix show would be that.”

Another comedy series, an upcoming revival of “Coach,” also came up, with one questioner asserting that news of the series’ pickup by NBC was received as a “practical joke” by some.

“One man’s practical joke is another man’s hit show,” Greenblatt said, calling “Coach” a family comedy with an established brand. “If that works, then ‘ALF’ the series is next.”