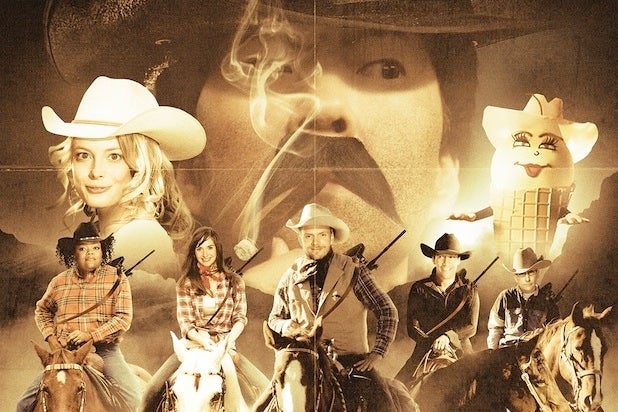 It wouldn’t be spring if the future of “Community” was certain.

Perennially on the bubble, Sony Pictures Television, the studio behind the comedy, the producers and cast have been stoking the fire in their fans’ bellies with a daily #SixSeasonsAndAMovie parody poster.

And TheWrap has your first look at the newest addition to the collection.

To recap: Monday’s poster featured the cast in a play on “The Social Network.” On Tuesday, “Castle’s” Nathan Fillion, a “Community” super fan and recent guest star, shared the show’s remake on the sci-fi cult classic “The Fifth Element” poster. And on Wednesday, the crew reminded us that Donald Glover‘s character Troy may never return from sea if there isn’t a sixth season in a take on Tom Hanks‘ “Cast Away.”

In addition to the benefits of yet another year of the Greendale crew, a sixth season renewal is necessary to unlock the door to the potential “Community” movie.

So, without further ado, here’s the newest #SixSeasonsAndAMovie parody poster. It casts the study group in the roles of 1960 Western “The Magnificent 7.”

See the full poster below.