Katy Tur, who rose to prominence during the 2016 presidential race for her reporting on then-candidate Donald Trump, is now dealing with some backlash… from her own parent.

In a Facebook post Tuesday, Zoey Tur, who became known as Chopper Bob for filming a mob beating driver Reginald Denny during the L.A. Riots and also the O.J. Simpson car chase, said her own daughter is “terrified” to meet her, noting that “it’s been 1,500 days since she last saw me and told me I was a terrible father after having just come out. I was crushed.”

This isn’t the first time Zoey Tur has publicly commented on her strained relationship with her daughter. In February she told “People” that the two “had stopped talking for a long time,” following her transition.

But Tuesday’s Facebook message, posted to her private profile, was decidedly more critical.

“She told me the day My x GF Carrie Fisher died that she was going to ‘set things right’ and come see me,” Zoey Tur wrote. “That was 171 days ago. Her promise was a whole lot a nuthin.”

“On June 8th a turned 57 and no call-not even an email,” Tur went on to write. “On Pride Sunday the NYTimes published a story about Katy that left me humiliated. The timing and optics couldn’t be worse.”

The recent New York Times profile about Tur’s rise to fame included a question about a recent comment by Zoey Tur about Katy’s difficulty in dealing with her transition  (“It’s not that she’s transphobic… It’s that her hero father has become this. And it’s fear of not fitting in. It’s the pressure of being on network television”). Katy responded by saying that the two “were not on speaking terms for a little while,” insisting, “that’s not because of the transition.”

“Truth is my daughter does not support the LGBT community,” Zoey wrote Tuesday. “She’s Transphobic and fearful that it will hurt her career as a broadcaster in these alt-right times. Career before family. In the words of Paddy Chayefsky: She’s pure television.”

Tur ended her post saying: “I apologize to you all and will continue to fight for my community. Happy Pride 2017 and Resist!”

Katy Tur did not immediately respond to TheWrap’s request for comment. 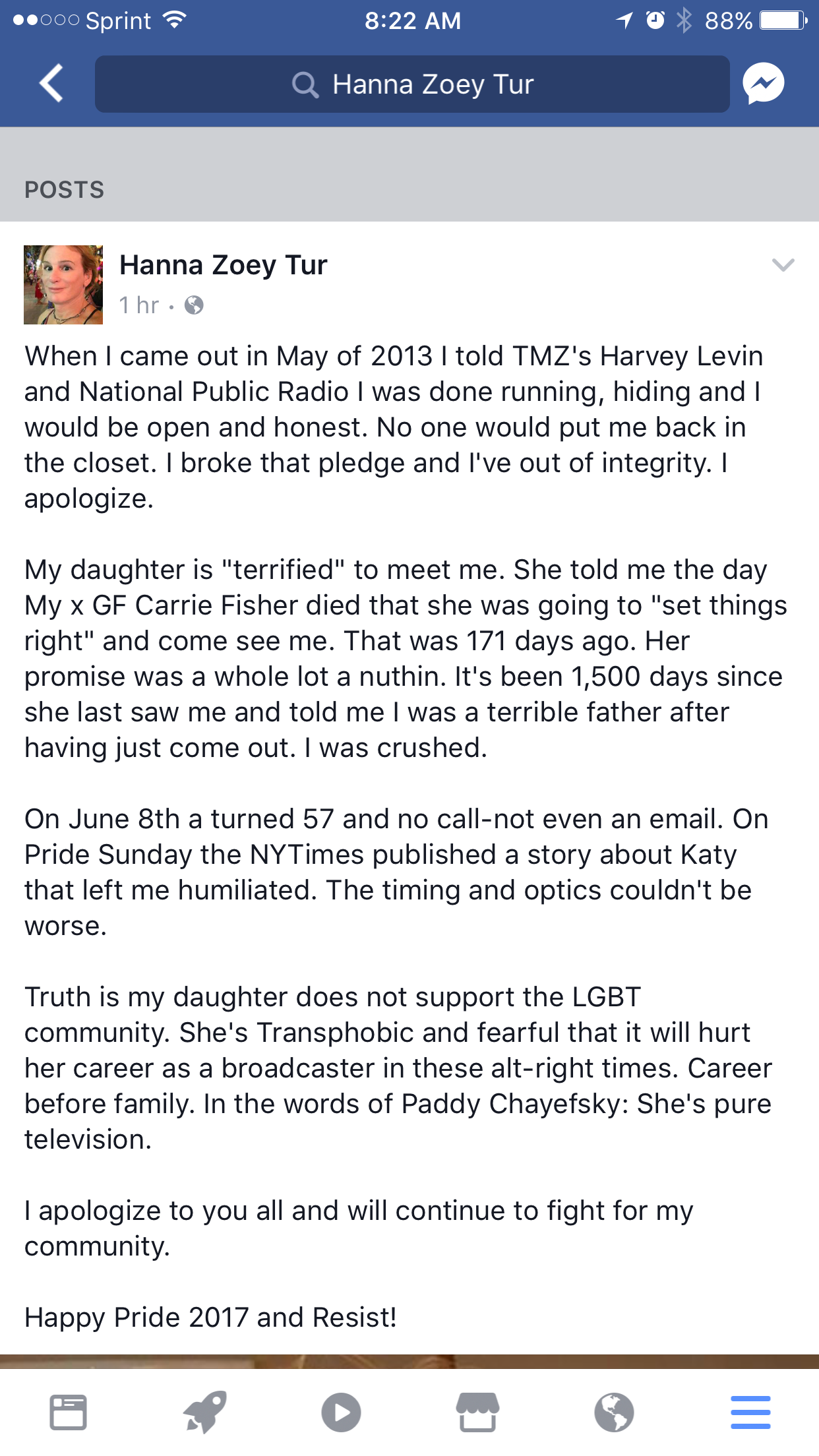