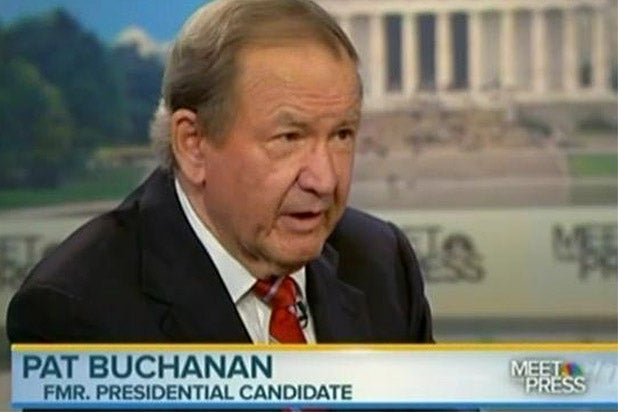 NBC’s “Meet the Press” reserved a seat at the table Sunday for conservative commentator Pat Buchanan, much to the chagrin of social media users.

Buchanan, 76, previously worked as a commentator on MSNBC. But the cable network dropped him in 2012 amid fallout over his book “Suicide of a Superpower,” which claimed diversity and immigration were ruining the country. Buchanan has also previously drawn fire for defending Adolf Hitler, and complaining that “homosexual sex is unnatural and immoral.”

A former adviser to Presidents Richard Nixon, Gerald Ford and Ronald Reagan, Buchanan ran for president himself in 1992, 1996 and in 2000.

On Sunday, he joined “MTP” moderator Chuck Todd to discuss “the return of populism” in the 2016 presidential race, along with similarities between his ’92 bid and Donald Trump’s current campaign.

“There is great similarity in the sense. Trump’s strength is the precise opposite of the distance of the Republican base from the Republican leadership in the country,” Buchanan said. “He’s exposing that and he’s hitting two of the really strong populist issues. One of them is overlap with Bernie Sanders, and that’s the trade issue, the export of American jobs and factories, and what’s happening to the American middle class.”

Buchanan also described illegal immigration as a “massive invasion” of the U.S.

“But the other one Trump is hitting, which is one of the hottest issues in the whole West, as well as the United States, is the massive invasion, if you will, of what people feel is the conquest of the West by massive third-world immigrations, coming from refugees, and border jumpers, and all the rest of them. He’s wired into both of these and they’re enormously popular issues.”

Buchanan’s analysis drew jeers on Twitter, where he became a trending topic, and the comments were overwhelmingly negative.

“What the hell is xenophobe Pat Buchanan doing on national TV?” wrote one Twitter user.

Another added: “Meet the Press providing a forum for racist Pat Buchanan to discuss why a racist like Donald Trump get so much attention.”

While a third tweeted, “And the racist xenophobe Pat Buchanan, who NBC fired for his hatefulness, is once again a guest on @meetthepress (6). Beyond belief.”

Below is a sampling of tweets as compiled by theWrap, along with video of Buchanan’s appearance on “Meet the Press.”

So, everyone at #MeetThePress thought it'd be a good idea to give a microphone to a bigot like #PatBuchanan?

what the hell is xenophobe Pat Buchanan doing on national TV?

And the racist xenophobe Pat Buchanan, who NBC fired for his hatefulness, is once again a guest on @meetthepress (6). Beyond belief.

Where did @meetthepress find the corpse of that old Nazi, Pat Buchanan?

Meet the Press providing a forum for racist Pat Buchanan to discuss why a racist like Donald Trump get so much attention.

#ChuckTodd had the indecency to have #PatBuchanan on #NBC's #MeetThePress; #Buchanan had the decency to appear without his hood and sheet.

Watch the video of Buchanan on “Meet the Press” below.