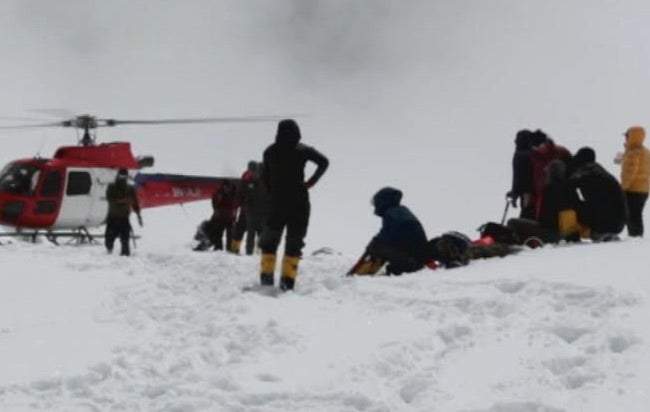 NBC’s Richard Engel reports from Nepal for a special “Dateline” Sunday that tells the stories of a group of survivors of the 7.8-magnitude earthquake that rocked Mount Everest in April.

The Seattle-based Madison Group was on Base Camp of Everest when the avalanche roared, leaving them stranded on the mountain and forcing them to come together to survive. Unfortunately, one of their party was killed.

“It’s a story of a tragic event on the world’s highest peak that has always had an allure for humanity, and it’s a story of survival and loss,” Engel told TheWrap in a wide-ranging interview.

Engel traveled to Nepal to sit down with survivors for their firsthand accounts of the massive quake and their desperate fight to stay alive in the days that followed. The documentary features never never-before-seen real-time footage of the quake, shot from a hiker’s video camera at the time of the deadly avalanche.

NBC News’ chief foreign correspondent hopes the documentary will grant viewers access to a place that’s out of reach for most, as evidenced by his own experience.

“It takes them on a journey. It takes the viewers to a place that is incredibly difficult to get to,” he said, noting that it wasn’t easy for the climbers of his NBC News crew to get to Base Camp. “They get to a place that’s always been considered magical, where a tragedy took place, and they meet a group of extraordinary people who were there and managed to get down.”

It’s still unclear how many people in Nepal were killed during the earthquake, and Engel hopes viewers will walk away understanding how much help the country needs.

“A lot of towns and villages there are still devastated, and for the people of Nepal, for the sherpa and other communities, they need a lot of ongoing assistance.”