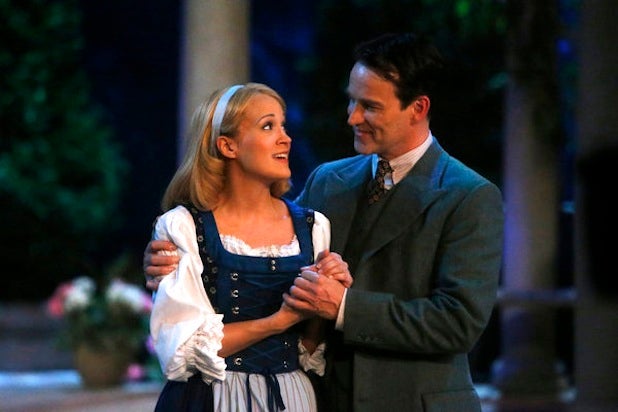 NBC certainly went out on a limb with its three-hour production of “Sound of Music,” which aired live on Thursday night and sparked a lot of commentary on Twitter.

The reported $9 million production was a big part of the network’s holiday programming roll out. Set to air at least one more time before Christmas, NBC reportedly hopes it can air annually as a holiday mainstay.

“Smash” producers Neil Meron and Craig Zadan headed up the production, which was based on the original 1959 Broadway production of “The Sound of Music,” starring Mary Martin and Theodore Bikel.

But of course, most viewers are better acquainted with the 1965 film starring Julie Andrews and Christopher Plummer. So, NBC’s take had big shoes to fill.

What did those in the entertainment industry have to say about the gutsy production?

See below for their best tweets about “Sound of Music Live”:

Tonight they will finally put back the original scene where Von Trapp sucks the blood out of Maria. #soml

Habits off to the entire cast/crew of @SoundofMusic Nice work to you all! #pulleditoff #hardtodo #talentedpeeps #SoundofMusic

I may be the wrong person to weigh in (Snow White Duet?) but I'm glad a network is taking a chance with #TheSoundOfMusic #FunAndSweet

Both my goosebumps and my "sing it bitch" hand might never go down. @AudraEqualityMc #SoundOfMusic

Yeah, Rolf's a Nazi, but that booty tho. #TheSoundOfMusicLive

BECAUSE IT'S PERFECTLY NORMAL MARIA HAS A SOUTHERN ACCENT IN 1940'S NAZI GERMANY. #TheSoundOfMusicLive

I would NOT trust my litter of children with Carrie Underwood without a Governess Cam. #TheSoundOfMusicLive #SOML