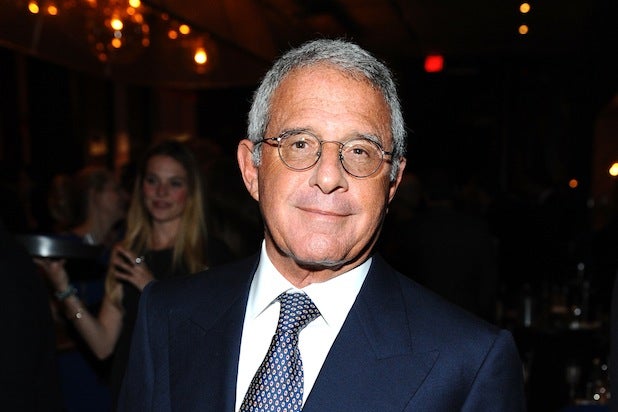 NBCUniversal international president Jeff Shell will take over Universal Studios from Ron Meyer, who will be promoted into the parent company’s corporate structure, the media company said Monday.

Shell’s promotion comes at the expense of Adam Fogelson, who is being forced out from his position as Universal Pictures chairman. Donna Langley will be promoted from co-chairman to chairman.

“First and foremost Jeff is a terrific media executive,” Steve Burke, chief executive officer of NBCUniversal said in a statement. “I have worked with him for over a decade and have been consistently impressed by his strategic vision, operational focus and energy.”

A release announcing the changes made no mention of Fogelson’s future plans, saying only that he had decided to leave the company.

“We’d like to thank Adam for his very significant contribution to our film division over the past 15 years,” Burke and Meyer said in a statement. “He has been an important part of our company for a long time and has helped deliver consistent results during a particularly challenging time for the film business.”

Fogelson had been chairman at Universal since 2009, overseeing a number of high-profile hits such as “Bridesmaids,” “Identity Thief” and “Les Miserables.” This summer has seen blockbuster new installments in the studio’s “Despicable Me” and the “Fast & the Furious” franchises, but also a massive flop in the supernatural comedy “R.I.P.D.”

Fogelson’s departure comes just hours after Universal’s executive team gathered at the Toronto Film Festival premiere of  “Rush” and for the FOcus Features film, “Dallas Buyers Club” (executives pictured left: Focus Features’ Andrew Karpen and James Schamus, Universal’s Meyer and Fogelson).  The Ron Howard racing drama was enthusiastically received, with talk of Oscar nominations buzzing throughout industry events. There was no mention of the changes in store for Fogelson, however.

Both he and the other top executives learned of the shake-up on Monday.

Meyer’s ascent has long been expected, as his role at the movie studio has been diminished in recent months. He will remain at the company through 2017 as part of a contract extension.

But the promotion of Shell came as a surprise. He was named president of NBCUniversal International in 2011, and though his primary focus has been TV distribution and production, he’d been tasked with several film-related responsibilities, including overseas distribution and marketing.

Meyer’s departure caps an 18-year run that’s included many ownership changes at Universal since he took over the studio in August 1995. He’s still one of the most respected executives in Hollywood, and was one of the most powerful talent agents in town, having co-founded CAA.

The London-based president of NBCUniversal International — who’s been reporting to Burke — will  move to Los Angeles with wife Laura and daughter Anna to assume the post.

The announcement came on the same day that NBCU Cable Entertainment Chair Bonnie Hammer announced an executive shakeup and that the new Esquire Network would replace the Style Network rather tha G4, as originally planned. She said the Style network had too much brand overlap with other female skewing NBCU networks, Bravo and E!

Before Shell took over NBCU’s international efforts, he’d served six years as president of the Comcast Programming Group. Prior to that, he was CEO of Gemstar TV Guide International and President of FOX Cable Networks Group.

Shell was nominated by President Obama last year to the post of chairman of the Broadcasting Board of Governors, the independent federal agency that oversees U.S. government non-military international broadcasting.

Shell holds a Harvard MBA and earned a BS in economics and applied mathematics from the University of California, Berkeley.