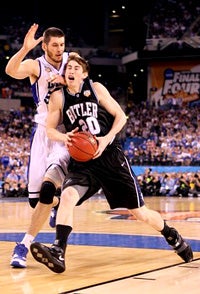 Call it the Butler Effect.

The NCAA on Thursday announced a new, multibillion-dollar, multimedia pact with CBS — and, in a twist, Turner — for the rights to carry the Division I men’s basketball tournament.

The new $10.8 billion, 14-year deal means that March Madness will be televised on CBS — and Turner’s TBS, TNT and TruTV — through 2024. There were three years left on the NCAA’s current 11-year, $6 billion contract with CBS.

Huge bonus for March Madness fans: As part of the agreement, the networks will carry all of the games live on four national networks — rather than CBS’ strategic regional switching — a first for the tournament.

The NCAA plans to expand the tournament from its current 65 team field to 68 in 2011, and eventually as many as 96 teams.

Turner also gets to run the NCAA March Madness on Demand online video player, though it will continue to be launched via NCAA.com and CBSSports.com.

CBS has broadcast the tournament since 1982. Ratings for the Duke-Butler championship game were up 31 percent over 2009 — earning the highest rating in five years.