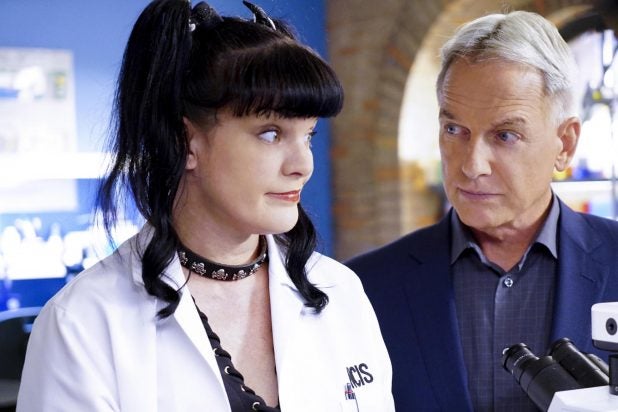 Many “NCIS” viewers started pointing out months ago that stars Pauley Perrette and Mark Harmon were no longer appearing together on screen: They didn’t even share a stage for Perrette’s final episode last week.

The reason goes back to an incident in 2016 in which Harmon’s dog bit a member of the crew, requiring 15 stitches, and Perrette objected when the dog was allowed to return to the set afterward, according to multiple individuals familiar with the situation.

For years, the banter between Harmon’s seen-it-all special agent, Gibbs, and Perrette’s free-spirited forensic scientist, Abby, fueled the military procedural. But the tension between the two stars became so bad after the dog-bite incident that the show came to an arrangement in which the stars never had to be in the same location together, individuals familiar with the situation told TheWrap.

“She did her scenes on one day and he did his work on other days, and they still produced a great show,” one insider said. “It was simply scheduled that they did not work the same days.”

The dog bite has been the subject of speculation for months, and arose again this week after Perrette tweeted about “Multiple Physical Assaults” and her need to “protect my crew.” Perrette declined to comment, but an insider said the actress did not mean to imply that there was any physical abuse or sexual harassment on set and added that she decided to leave “NCIS” even before the dog incident.

“NCIS” is generally known as a dog-friendly set, and by all accounts Harmon’s dog got along fine with the cast and crew until October 2016. That’s when the dog bit an unidentified crew member who was playing with him, requiring the stitches.

TMZ wrote about the incident at the time, and Harmon’s attorney, Barry Axelrod, confirmed to TheWrap on Wednesday that he consulted with Harmon about the potential liability of the dog returning to the “NCIS” set after the bite.

Axelrod disputed reports that the dog was a pitbull, but said he did not know the animal’s breed.

The attorney said he advised Harmon about a legal concept called the “one free bite rule,” which says, essentially, that an owner can only be held liable for injuries caused by a dog if the owner knows the dog bites. The first bite is “free,” under this theory; any subsequent bite is not, because the owner knew the dog might be inclined to bite.

But it turned out not to be a free bite: The situation escalated dramatically, creating discord between two key players on the set of one of CBS’ most bankable hits. Harmon serves as executive producer of “NCIS” as well as the show’s star, while Perrette is the most popular woman in primetime television, according to consumer surveys by the Q Scores Company.

Though Axelrod said his client’s dog “did not come back to the set” after the bite, others who spoke to TheWrap on condition of anonymity said the dog did return.

“If he brought the dog to work, he was on a leash or in his trailer. He definitely took steps to make sure that the dog was with him and was not just roaming freely, and then he just stopped bringing him altogether,” one person familiar with the situation said.

But concerns about the dog roiled the “NCIS” set.

Several people were uncomfortable with the dog’s presence around the production after the bite, but were afraid to confront Harmon, their boss.

But Perrette had plenty of clout and spoke up for the others who felt that they could not, people familiar with the situation said. Then things escalated.

Fans and critics began scrutinizing scenes to see if Abby and Gibbs appeared together. USA Today writer Bill Keveney wrote of last week’s goodbye to Abby: “The episode featured  flashbacks focusing on the almost father-daughter bond between Gibbs and Abby, but Harmon and Perrette never appeared together in Abby’s finale.”

Also Read: Ratings: First 'NCIS' Without Pauley Perrette Comes Back Down to Earth

He linked to a story about another CBS show, “The Good Wife,” in a sly reference to longstanding speculation that stars Juliana Margulies and Archie Panjabi were spliced into their final scene so they wouldn’t have to shoot it together. (Those involved with “The Good Wife” have declined to say precisely what happened.)

One person familiar with the “NCIS” situation told TheWrap that Harmon and Perrette were edited together in certain scenes in Perrette’s final season through the magic of television.

Though Radar Online reported details of the dog dispute in December, the subject gained new scrutiny this week because of Perrette’s tweets. She said in a follow-up statement, “I want to thank my studio and network CBS. They have always been so good to me and always had my back.”

Perrette announced her exit plans in October 2017, nearly a year after the dog bite.