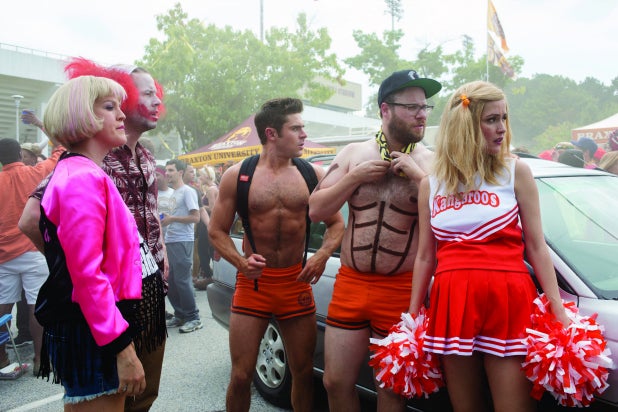 Seth Rogen and Rose Byrne are back with “Neighbors 2,” this time to take on a bunch of sorority girls that are robbing them of sleep. And this time, hunky Zac Efron is there to help.

While the plot for the sequel to 2014’s “Neighbors” is pretty much the same, critics are more than happy to say that the movie warranted a follow-up. Praising the jokes, the underlying message of female empowerment and the cast, critics have collectively given the film a decent 64 percent score on Rotten Tomatoes ahead of its opening.

“‘Neighbors 2’ maintains the same sort of raucous and outrageous humor that made the first one so much fun, illustrating the difference between pot-smoking 30-ish parents and out-of-control wild children, and the jokes and set pieces here land as well as they did before,” wrote TheWrap’s Alonso Duralde.

The Star Tribune’s Colin Covert agreed, writing “most comedy sequels are cheap cash-ins that make me break out in hives. So it was a delightful surprise that the follow-up to 2014’s so-so frat house farce ‘Neighbors’ is a solid improvement, an enormously likable film.”

“Neighbors 2” stars Rogen, Byrne, Efron, Chloe Grace Moretz, Dave Franco, Kiersey Clemons and Beanie Feldstein, and this time around, Mac (Rogen) and Kelly (Byrne) have to take down a sorority that moved in next door while the couple is in escrow with a second child on the way.

See nine of the best reviews below.

“‘Neighbors 2: Sorority Rising’ is a wonderfully goofy sequel, light on plot and heavy on silly set pieces, but it’s anchored by a sense of self-awareness that bro comedies often lack, poking fun at the insecurities of the millennial male without ever coming off as forced or preachy.”

“Most comedy sequels are cheap cash-ins that make me break out in hives. So it was a delightful surprise that the follow-up to 2014’s so-so frat house farce ‘Neighbors’ is a solid improvement, an enormously likable film. They share a lightweight summer tone, adults-versus-students theme and simple story lines, but the latest version shows how carefully recycled materials can create very good products. ‘Neighbors 2: Sorority Rising’ returns agreeable personalities to the screen, adds clever new ideas and polishes the premises it repeats.”

“‘Neighbors 2: Sorority Rising’ isn’t as good as its predecessor, but it’s a fun comedy made by smart, talented people, and it’s certainly a lot better than you would expect. Between this film and Phil Lord and Chris Miller‘s ’22 Jump Street,’ there’s definite hope that the stigma of the comedy sequel will start to fade away.”

“‘Neighbors 2: Sorority Rising’ retreads a lot of the same ground from the original in that it’s still the story of a Greek house making life a living hell for Mac (Seth Rogen) and his wife Kelly (Rose Byrne), but ‘Neighbors 2’ goes deeper by delving into gender issues and sexism. It’s a sequel that has all of the laughs of the first film with the added depth of a social issue picture … . It’s difficult to say it ‘improves’ on the original because the original was so good, but it’s definitely one of the best comedy sequels ever made.”

“‘Neighbors 2: Sorority Rising’ is that rare comedy that keeps being consistently funny while treating everyone with dignity and respect. This is a sequel just as funny as the original, and it celebrates diversity while still being gut-laugh hilarious.”

“It makes a lot of sharp points about male-female double standards, aging, and the acceleration of intergenerational conflicts. It’s also very funny. For Rogen, that makes it one more good comedy among many. Within the Efron filmography, though, this may stand as a masterpiece.”

“There’s a scene in a film class in ‘Scream 2’ where the college kids (Sarah Michelle Gellar, Joshua Jackson, practically AARP members now!) start arguing over sequels. As in, name one that’s better than the original. ‘Aliens,’ ‘T-2,’ just about every title gets shot down. Finally, a student says he’s got one: ‘The Godfather: Part II.’ Well, add ‘Neighbors 2: Sorority Rising’ to that rarefied list. Taking off from the 2014 goofball original — about a couple terrorized by the frat brothers next door — ‘Neighbors 2’ brings back most of the principals from the first movie, and then amps up the conflict by introducing a renegade band of college sisters.”

“With the added layer of humor that comes with switching genders, ‘Neighbors 2’ ends up offering even more laughs than the original movie.”