Neil deGrasse Tyson is simply not buying Tom Cruise’s latest stuntwork in “Top Gun: Maverick.” It’s not because the astrophysicist thinks Cruise isn’t handling it himself, but rather because apparently, it’s not physically possible.

In a short thread on Twitter on Sunday afternoon, Tyson tore apart one particular moment in the “Top Gun” sequel, saying there was simply no way Maverick (Cruise) could have survived it.

“Late to the party here, but In this year’s @TopGunMovie, @TomCruise’s character Maverick ejects from a hypersonic plane at Mach 10.5, before it crashed,” Tyson wrote. “He survived with no injuries. At that air speed, his body would splatter like a chainmail glove swatting a worm. Just sayin’.”

Tyson then went in on the mechanics of it, posting graphics to prove his point, and making it clear that not only would Maverick die, but that he’d be “very dead.” 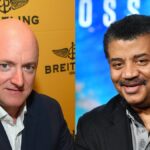 “When Maverick ejected at Mach 10.5, he was going 7,000 mph, giving him 400 million joules of kinetic energy — the explosive power of 100 kg of TNT,” Tyson explained. “A situation that human physiology is not designed to survive. So, no. Maverick does not walk away from this. He be dead. Very dead.”

This, of course, isn’t the first time the astrophysicist has used his scientific expertise to debunk fun, fictional situations. In 2017, he posted a video of himself breaking down the science part of the year’s most popular sci-fi movies.

Last year, he spread his own version of Christmas joy by literally debunking the existence of Santa Claus.

As always, Tyson’s latest debunking drew sarcastic replies on Twitter, with many pointing out that “science doesn’t apply to Tom Cruise.”