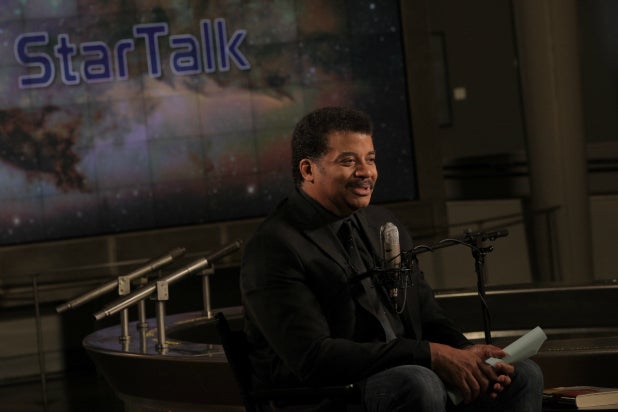 When Neil deGrasse Tyson turned his podcast “Star Talk” into a TV talk show, he approached it with a no-frills mindset.

“I knew that there were radio shows where they just put a camera in the radio studio, and that becomes television,” Tyson told TheWrap, pointing to “The Howard Stern Show” and “Imus in the Morning” as examples. “Nat Geo had bigger visual ambitions.”

Now entering its second season on the National Geographic Channel, “Star Talk,”a blend of hard science and popular culture, shoots from the very ambitious-looking Hall of the Universe at the American Museum of Natural History’s Rose Center for Earth and Space, where Tyson has since 1996 served as director of the Hayden Planetarium. He also serves as the scientific community’s unofficial emissary to the media and entertainment worlds, appearing on “The Colbert Report,” “The Big Bang Theory” and “Stargate: Atlantis.” In 2014, he hosted Fox’s Emmy-winning revival of “Cosmos,” the original version of which was created by Tyson’s hero, . It was on the heels of “Cosmos” that Fox’s sister network, NatGeo, announced it would turn “Star Talk” into a late-night TV show.

In the premiere of the show’s second season, scheduled for Sunday night, Tyson speaks to his biggest guest yet — former President Bill Clinton. The host talked with TheWrap about the intersection of science and politics.

TheWrap: How did you land the Clinton interview?
Neil deGrasse Tyson: I was invited to the Clinton White House back in 2000 to give a presentation in front of Hillary and Bill for science shakers and movers of Washington. So I think Bill owed me one. It’s fun to say that even though it’s clearly not true. But he knows who I am because I was on his invitation list back then. So we put in the request. He’s local here, he’s got an office in Harlem and another in Midtown. So we just met him at one of his offices and we did the interview. He knew that I’d be focusing on science and his policy and the politics of science, and that’s really how it unfolded. So I was very happy with that.

How science-literate is he?
He’s about as science-literate as I’ve seen in a president. I bet Obama is a little more scientifically literate. But I think for a president what matters is not how scientifically literate you are. What matters for a leader is how well do you know what you don’t know — how well do you know the limits of what you know. Because if you know your limits, then you bring in advisors. But if you don’t know enough to do that, and you think you know something that you don’t know, then that’s a recipe for disaster. So all I really care is that they have an understanding of the limits of their knowledge of science.

You say in the episode that you think Clinton deserves some of the credit for the Human Genome Project. Why does he deserves credit for something that other people did while he was president?
If you’re the leader of a country and that country makes a major discovery that is funded by the government, then yeah, take some credit. We credit Kennedy for landing on the moon. He wasn’t president when we landed on the moon, but it was under his political capital that we landed on the moon.

Have you tried to get President Obama on the show?
Yes, actually. I was almost going to interview him on Monday [Oct. 19]. That would have to now air in the spring. But we’re working on another date. He’s a busy guy.

How good a job do you think Obama has done in relation to science?
Here’s where I’m disappointed. He gets up in front of NASA and says, “Let’s go to Mars.” How can you not cheer that? So everybody cheers. But then you say, “Well, when are we going to go to Mars? The 2030s.” Well, wait a minute. What does it mean? You are saying that we are going to go to Mars under a budget line not yet established and the leadership of someone to be named later. So you’re not actually investing political capital in this. Kennedy was investing political capital. He said we would put a man on the moon and return him safely within the decade.

Will the inevitable Donald Trump presidency be a good thing or a bad thing for science?
I think all you have to do is convince president Trump — and this is not hard to convince people, especially not a businessman — that innovations in science and technology are the engines of the 21st century economy. He knows business more than, perhaps, others on the table, so if you come to him from that angle, I don’t see why that wouldn’t be a slam dunk.

Also Read: 7 Things We Learned About NatGeo's 'Killing Kennedy' at Its Premiere

Warner Bros. is reportedly developing a movie about . Who should play him?
I’m not a casting agent. Rarely do I say, “Oh, that person’s miscast.” I might have said that twice in my life. So generally I just trust the people who do it professionally, then embrace it when it unfolds. We just have to make sure we get the right turtlenecks to put on him. I was told that one of his turtlenecks is on display at the Smithsonian, so we have a backup in case we can’t find one.

Season 2 of “Star Talk” will premiere Sunday at 11 p.m. ET on the National Geographic Channel.