The Internet may be divided about Amazon founder Jeff Bezos going into space, but Neil DeGrasse Tyson is in full support of the move. In fact, the astrophysicist commended Bezos for the decision on Tuesday’s episode of “The View.”

Though Tyson was brought on the show to discuss recent videos of apparent UFOs released by the U.S. military, the hosts of “The View” first touched on the uproar caused by Bezos announcing his upcoming trip on Monday and the idea of billionaires using their privilege for things like this in general.

But for Tyson, Bezos’s voyage is actually a comfort. Apparently, though his academic specialty is space, Tyson himself wouldn’t necessarily jump at the opportunity to go without some assurances. 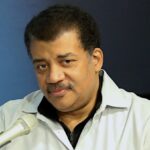 “It’s just the kind of testing I would want to happen before I ever agree to a trip,” Tyson said. “If Elon [Musk] wants to say ‘Neil, you want to go to Mars?’ I would say ‘Have you sent your mother first, and brought her back?’ That would be my evidence of safety.”

So, for Tyson, Bezos putting himself at risk is a sign of good faith and acknowledgment of the risks involved.

“I think if Jeff Bezos is putting his flesh in the game, then we should all pause and pay attention,” Tyson added. “And check what his latest will looks like.”

Tyson has not posted to his social media accounts to expound upon his thoughts since Bezos announced his plans on Monday, but really, he summed it up pretty cleanly on “The View.”