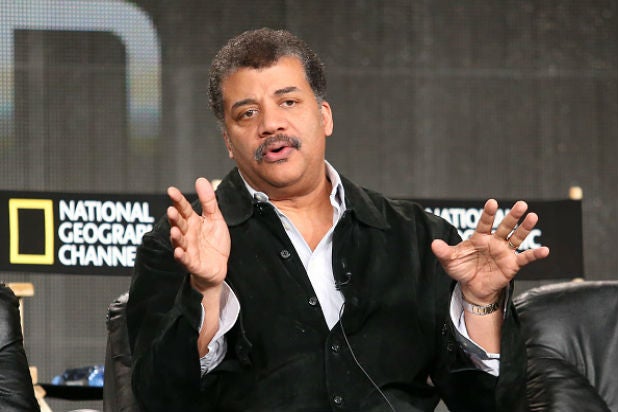 Neil deGrasse Tyson has weighed in on Donald Trump’s plan to add a “Space Force” to the U.S. military.

Perhaps surprisingly, celebrity astrophysicist Tyson is on board with the idea — but he seems to believe that there’s another, more urgent issue that needs to be addressed.

“I’m okay with a US Space Force. But what we need most is a Truth Force — one that defends against all enemies of accurate information, both foreign & domestic,” Tyson tweeted Monday.

Also Read: Neil deGrasse Tyson Has a Factual Bone to Pick With 'Chappaquiddick'

In a subsequent tweet, Tyson pointed to the National Academy of Sciences, chartered by President Abraham Lincoln in 1863, as the “beginnings of a Truth Force,” saying that the academy “provides objective, science-based advice on critical issues affecting the nation.”

Tyson’s assessment of Space Force, a proposed sixth branch of the military, was kinder than many were when Trump unveiled the plan in June.

Twitter users were quick to mock Trump for his plan to take on outer space, and many expressed anger that the announcement came in the midst of controversy over the Trump administration’s policy of separating immigrant children from their families at the Mexican border.

Actress and “Crooked Media” host Grace Parra criticized Trump for announcing the Space Force despite the ongoing controversies of his presidency, tweeting, “He’s creating a Space Force while —
—Flint still doesn’t have clean water
—Children are being ripped from their families at the border
—DACA is still under fire
—Climate change continues to erode our globe

…but yeah sure launching missiles at Mars seems great.”

Civil rights activist Michael Skolnik, meanwhile, tweeted, “A space force will not distract us from the fact that @realDonaldTrump is responsible for the torture of children.”

And actor Jim Carrey, who has practically made a second career out of thumping Trump with his artwork, weighed in with a drawing that bore a caption reading, in part, “To stupidity and beyond,” an apparent riff on the catchphrase of “Toy Story” character Buzz Lightyear.

I’m okay with a US Space Force. But what we need most is a Truth Force — one that defends against all enemies of accurate information, both foreign & domestic.

The beginnings of a Truth Force: The National Academy of Sciences, chartered by President Lincoln in 1863, “provides objective, science-based advice on critical issues affecting the nation.” [Vid: 3min]. https://t.co/EU8KZ050vF