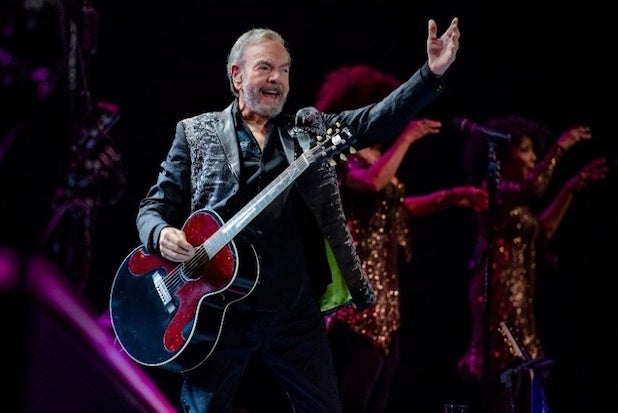 Neil Diamond is coming to Broadway. A new biographical musical featuring Diamond’s greatest hits is coming to the stage, and the musical’s book will be written by Anthony McCarten, the screenwriter for the smash movie musical “Bohemian Rhapsody,” the play’s producers announced Monday.

Tony winner Michael Mayer will direct the still untitled play, but the play will tell Diamond’s life story and is currently in development. Ken Davenport and Bob Gaudio are producing the musical.

“I’ve always loved Broadway. The inspiration for many of my early songs came from shows like ‘West Side Story,’ ‘My Fair Lady’ and ‘Fiddler on the Roof,’ so it seems only fitting to bring my songs to The Great White Way. I’m honored and excited to be working with this great team,” Diamond said in a statement.

The musical will tell the story about how a poor, Jewish kid from Brooklyn became an era-defining songwriter of the 1960s and ’70s, charting the disappointments and triumphs along the way. Additional details will be announced shortly.

“On the mantle-piece in my childhood home in New Zealand, there were always two pictures: one was of the Pope, the other of Neil Diamond,” McCarten said in a statement. “The epic musical catalogue of this Rock and Roll Hall of Famer flowed endlessly off our family record player.  As a child you took it into yourself, and to this day I can recite the lyrics of his hits deep into their second or third verses. Imagine my excitement, then, when the opportunity arose to work with Neil on a musical based on his life and music. A very, very easy and so sweet ‘Yes!'”

“Having been intimately associated with one very special biographical musical, I am clearly a fan of the form.  And as a fellow member of the Rock and Roll Hall of Fame, I remain in awe of Neil Diamond’s contribution to American popular culture, music, and of his incredible life story,” Gaudio said in a statement.

Diamond is not alone among rock stars going the musical biography route. Alanis Morissette is getting her own stage production based on her landmark album “Jagged Little Pill,” and after the success of “Bohemian Rhapsody” and more recently the Elton John musical “Rocketman,” artists like Boy George have also recently announced plans for movie musicals based on their lives.

The “Sweet Caroline” songwriter also retired from touring back in January 2018 after revealing he was diagnosed with Parkinson’s disease. Though he said he would continue to write and record new music.

Diamond has sold more than 130 million records worldwide and has landed 39 singles on the U.S. Top 40 charts, among them songs like “Cracklin’ Rose,” “Sweet Caroline,” “Song Sun Blue,” “Longfellow Serenade,” “I’ve Been This Way Before,” “If You Know What I Mean,” “Desiree,” “You Don’t Bring Me Flowers,” “America,” “Yesterday’s Song,” “Heartlight,” and many more. He’s a Grammy winner and member of the Rock and Roll Hall of Fame. He’s repped by WME.

McCarten is the screenwriter of “Bohemian Rhapsody,” as well as “The Theory of Everything” and “Darkest Hour.” His latest play, “The Pope,” premieres later this year. He’s represented by CAA.