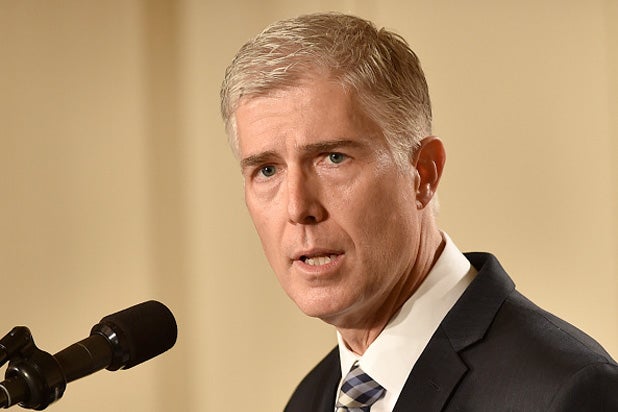 With the drama usually reserved for a “Bachelor” rose ceremony, President Donald Trump announced Tuesday that 10th Circuit Court of Appeals judge Neil Gorsuch was his pick for the empty seat on the U.S. Supreme Court.

“I have selected an individual whose qualities define, really and I mean closely define, what we’re looking for,” Trump said in the East Room of the White House.

After the reveal, the former host of reality TV show “The Apprentice” asked the crowd, “Was that a surprise?”

The 49-year-old finalist is a conservative known as a strict originalist in interpreting the Constitution like Justice Antonin Scalia, whose seat he would fill if confirmed by the Republican-led Senate.

The White House made its announcement two days earlier than expected, perhaps in an effort to distract from the backlash over the administration’s recent executive order banning immigration and travel from seven Muslim countries.

In true reality-show fashion, Trump tweeted that he was about to announce new pick for SCOTUS, telling his followers: “I have made my decision on who I will nominate for The United States Supreme Court. It will be announced live on Tuesday at 8:00 P.M. (W.H.)”

Adding to the cliff-hanger drama, CNN reported Tuesday that Gorsuch and another candidate, 3rd U.S. Circuit Court of Appeals judge Thomas Hardiman, were both brought to Washington ahead of the announcement.

Gorsuch was appointed to the Tenth Circuit Court of Appeals by President George W. Bush in May 2006. If confirmed, the he would be the youngest nominee to the Supreme Court in the last 25 years.

A graduate of Harvard Law School with a Ph.D. from Oxford University, he clerked for prominent conservative judges such as Court of Appeals for the District of Columbia Circuit Judge David Sentelle, and Supreme Court Justices Byron White and Anthony Kennedy.

Gorsuch is best known for siding with religious organizations in opposing to parts of the Affordable Care Act that required coverage of contraceptives.

Political observes also noted that his mother, Anne Gorsuch, was head of the Environmental Protection Agency from 1981 to 1983, under Ronald Reagan. She resigned 22 months into the job over a scandal involving mismanagement of the Superfund program, a government effort to clean up land in  contaminated by hazardous waste.

Democrats have vowed to fight the appointment. In March, Barack Obama named Merrick Garland, chief justice of the U.S. Court of Appeals for the D.C. Circuit, to fill Scalia’s vacancy. The Republican-led Senate refused to hold a hearing or vote on his nomination until after the election.

“This is a stolen seat. This is the first time a Senate majority has stolen a seat,” Democratic Sen. Jeff Merkley of Oregon, told Politico.

I have made my decision on who I will nominate for The United States Supreme Court. It will be announced live on Tuesday at 8:00 P.M. (W.H.)