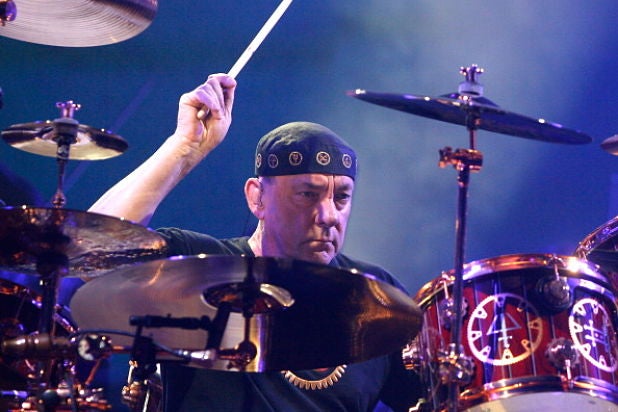 Neil Peart, the drummer and lyricist for the ’70s and ’80s Canadian progressive rock band Rush, has died, according to the band’s Twitter account. He was 67.

Peart died in Santa Monica, California on Tuesday and had been suffering from brain cancer. A family spokesperson confirmed that Peart had been diagnosed with brain cancer three years ago, but hadn’t announced it publicly to the band’s massive fanbase.

Peart joined up with singer and bassist Geddy Lee and guitarist Alex Lifeson in 1974, after the band had released only one, self-titled album. He is often credited with being one of the best drummers in rock and roll history for his flamboyant, wild skills and style behind the kit. His massive drum kits were almost as legendary as the player himself, oftentimes with 40-plus pieces of percussions, chimes, gongs and cymbals. Peart penned songs like “Tom Sawyer” and with the band was renowned for his virtuoso instrumentation and musicianship.

Peart grew up in Ontario and took to music after being inspired by big band drummers such as Gene Krupa and Buddy Rich. The band’s prog rock music drew from jazz and hard rock influences equally, and Peart’s lyrics in particular blended fantasy and science fiction elements with deeper, philosophical themes. The band released a total of 19 studio albums and 11 live albums.

The height of the group’s popularity came during the 1980s, resulting in eight consecutive albums to reach the top 10 on the Billboard 200, from 1980’s “Permanent Waves” through 1989’s “Presto.” As their popularity grew, the band’s ’70s albums would also go on to attain gold or platinum status.

The band posted the announcement of Peart’s death on Twitter. “It is with broken hearts and the deepest sadness that we must share the terrible news that on Tuesday our friend, soul brother and bandmate of over 45 years, Neil, has lost his incredibly brave three and a half year battle with brain cancer (Glioblastoma),” the band wrote. “We ask that friends, fans, and media alike understandably respect the family’s need for privacy and peace at this extremely painful and difficult time. Those wishing to express their condolences can choose a cancer research group or charity of their choice and make a donation in Neil’s name.”

Peart’s first wife, Jacqueline Peart, died from cancer in 1998. They’d been married for more than 20 years. He later remarried in 2000. The drummer is survived by Carrie Nuttall and their 10-year-old daughter, Olivia.CBC News was first to report the news of Peart’s death.