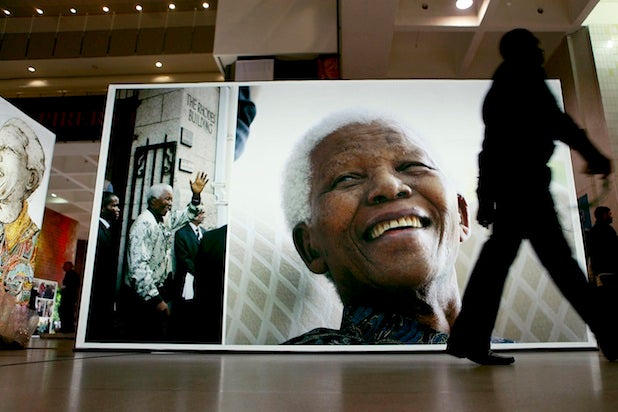 The network and cable news outlets jumped into action just minutes after the news broke that former South African president Nelson Mandela Dead at 95 on Thursday. He was 95.

The leader spent 27 years imprisoned by South Africa’s opprepressive Apartheid. An activist for years, he inspired many and won the Nobel Peace Prize and served as that country’s president from 1994 to 1999.

Several of the networks are offering special coverage surrounding Mandela’s death, which may include some programming changes.

See below for how the networks are covering Mandela’s death:

(Note: We will update as information becomes available)

CNN
— Anderson Cooper will be live through 11 p.m. He will be joined by Christiane Amanpour and Wolf Blitzer with Robyn Curnow will be reporting from Johannesburg, South Africa.

– The film, “Unreal Dream,” which was to air Thursday at 9 p.m. will be rescheduled.

– Online, users can go to www.cnn.com as well as the CNN Apps for the latest updates, which include articles, photo galleries, interactives and video. Additionally, CNN iReport, the network’s global participatory news community, invites users to share their memories, photos and personal stories of the Nobel Peace Prize winner.

Also read: President Obama’s on Nelson Mandela: ‘An Example That All Humanity Can Aspire To

– Breaking coverage with Shepard Smith leading the network’s coverage for the first hour of breaking news, preempting “The Five,” on Thursday afternoon.

– At 6 p.m. ET, “Special Report W/ Bret Baier” will continue the network’s live coverage with additional contributions from FNC contributor and co-host of “The Five,” Juan Williams, one of the first journalists to interview Mandela at his home following his release from prison while working for the Washington Post. Also, FNC’s Jennifer Griffin, who covered his release from prison, will be live from the Pentagon and FNC’s chief White House correspondent Ed Henry is live from the White House.

– FNC’s coverage will continue during the regularly scheduled programming through the evening and into primetime from 7-11 p.m. ET. FNC producer Paul Tilsley and a crew are currently in South Africa.

See video: Nelson Mandela: 5 Great Interviews in the Life of a Legend (Video)

NBC
— “NBC Nightly News with Brian Williams” will provide a special one-hour broadcast on the life and legacy of Nelson Mandela on Thursday. The second half-hour is optional to local NBC stations. Brian Williams will anchor from New York with contributions from Tom Brokaw, Andrea Mitchell, Charlayne Hunter-Gault, and Rohit Kachroo outside the Mandela home in Johannesburg. More to be announced.

– “Sound of Music Live” with Carrie Underwood and “True Blood’s” Stephen Moyer will air as planned at 8/7c.

– “Nelson Mandela: One Man,” Thursday, 9/8c; Friday, 10 a.m./9c: “Navigates Mandela’s journey through life, from the dedication he demonstrated as a young activist in the African National Congress, the struggles he experienced in his years on the run and in hiding, the darkness of his time as a political prisoner and the triumph of his inauguration as the first black president of South Africa. The hour-long documentary also charts the history of racism in the country, beginning with the arrival of the National Party, through the upheaval and segregation of apartheid, and finally the dismantling of the cruel regime in the 1990s.”

– “Music for Mandela,” Thursday, 10/9c; Friday 11 a.m./10c: “Explores the role music played in the life of if the iconic leader. Through the duration of his prison term to the present day celebrations of his legacy, the music born out of Mandela’s inspiring journey is discussed by his closest friends, former exiled musicians, current international artists and community volunteers. Combining striking visuals with songs stemming from a wide range of musical genres, the documentary is not only a tribute to the man himself, but also to the ultimate power of music to motivate and educate.”