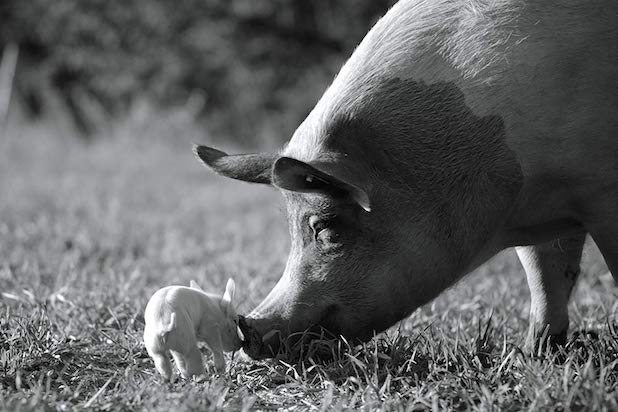 Neon is continuing its busy streak and picked up the North American rights to the documentary “Gunda,” which premiered at the Berlinale festival and is executive produced by Oscar winner Joaquin Phoenix, the studio announced Tuesday. It’s the first sale of a festival title.

“Gunda” is shot in mesmerizing black and white and follows a day in the life of some livestock on a farm, including a mother sow (the eponymous Gunda) two ingenious cows, and a scene-stealing, one-legged chicken in an artful, dialogue-free triptych.

“Gunda” was directed by the famed nature filmmaker of “Aquarela” Victor Kossakovsky. It made its world premiere in the new competitive section at the festival, Encounters, where it was nominated for the Berlinale Documentary Award.

Whereas his previous film “Aquarela” was a reminder of the fragility of human tenure on earth, in “Gunda,” Kossakovsky reminds us that we share our planet with billions of other animals. Through encounters with the animals, Kossakovsky movingly re-calibrates our moral universe, reminding us of the inherent value of life and the mystery of all animal consciousness, including our own.

Jeff Deutchman negotiated the deal for NEON along with UTA Independent Film Group on behalf of the filmmakers. Cinephil is handling international sales.

After winning the Oscar for Best Picture with “Parasite,” Neon has since scooped up the rights to several Sundance films, including two documentaries “The Painter and the Thief” and “Spaceship Earth.”

For the record, a previous version of this story spelled Victor Kossakovsky’s first name with a “k” and not a “c.”