With the streets full of people running into traffic while staring at their phones and chasing Pokémon, the zeitgeist timing couldn’t be better for “Nerve,” a thriller about people performing embarrassing and increasingly death-defying stunts in the name of a shadowy online game. But while the film’s vertiginous set pieces are appropriately heart-clenching, it’s not nearly as successful at little details like plot and character.

If “Nerve” were an app, you’d be hooked on it for a few days before deleting it when you realized that its limitations outweigh its ambitions.

Emma Roberts stars as Venus “Vee” Delmonico — no, seriously — a Staten Island high school senior who’s too afraid to tell her mom (an underutilized Juliette Lewis) that she wants to go cross country to CalArts to attend college. Vee’s older brother died the summer after his high school graduation, and her life has subsequently been on lockdown.

Vee has the standard teen-movie orbit: the football player who’s her unattainable crush, the sweet nerd (Miles Heizer of “The Stanford Prison Experiment” as Tommy) who adores her from afar and the brash best friend (Sydney, played by Emily Meade, “Money Monster”) who tries to push Vee out of her rut. 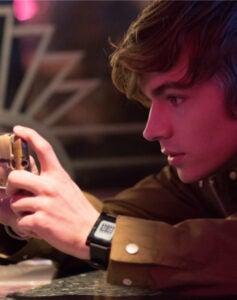 Cheerleader Sydney just flashed her posterior at a stadium of students as part of Nerve, a secret online game where players tackle increasingly outrageous dares for the entertainment of thousands of watchers who are paying to observe. Stung by Sydney’s criticism, Vee becomes a Nerve player herself, starsing total stranger Ian (Dave Franco) in a diner.

Ian, as it turns out, is a Nerve player himself, and the two of them wind up being forced togetheading into the city on Ian’s motorcycle. (Like most of the film’s locations, Ian’s bike is underlit by neon, which does make it stand out in the driving-into-Manhattan montage.) The dares start getting deadlier, and with Nerve threatening to steal her identity and her family’s savings if she tries to quit, Vee to the bitter end.

Directors Henry Joost and Ariel Schulman (“Catfish”) sell the film’s premise, as we see random strangers on the streets of New York City capturing the action on their phones and actively participating in the ever-growing game. The stunts that involve heights — whether it’s walking on a ladder that’s been extended between two high-rise windows or one-hand dangling from a construction crane — will challenge anyone who closed their eyes during “The Walk,” as will a sequence in which Vee guides a blindfolded Ian, who has to steer his motorcycle through traffic and get it up to 60 mph.

Roberts and Franco, at least, have a lot of appeal together, even through they’re playing sketchy ideas of charming young people. The screenplay by Jessica Scharzer (“American Horror Story”), based on the novel by Jeanne Ryan, doesn’t give the supporting cast much to do, and that’s just one of the ways in which “Nerve” falls short. Most of the twists, particularly those involving a character who is more than s/he initially seems, can be seen coming from miles away, and the climactic showdown turns out to be something of a letdown. There’s an interesting notion in having the Nerve game be open-sourced, meaning that the only way to shut it down is to make the watchers stop watching, but the movie blips past this plot point quickly in favor of more stunts and peril. (That open sourcing also means that the nerve center of Nerve always remains anonymous and mysterious, depriving the film of any kind of real villain.)

Any ideas that “Nerve” has about the threats of the Internet or the cowardice of online voyeurism get lost in the hubbub, resulting in a film that’s high on flash and style — thanks mostly to cinematographer Michael Simmonds (“Vice Principals”) and production designer Chris Trujillo (“Stranger Things”) — but low on heart and soul. Someone should have beta-tested the script and crafted a 2.0 version before shooting it.