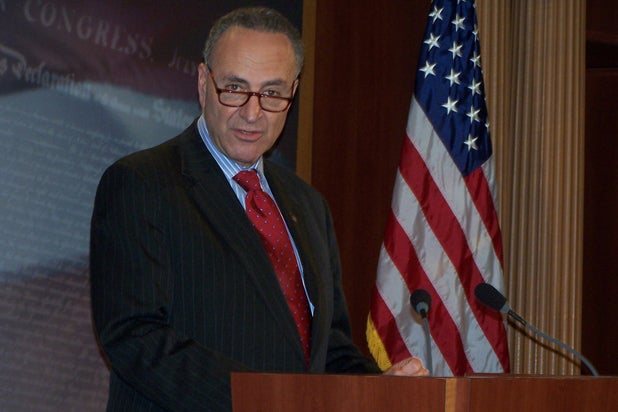 “That means that now is the moment to #SavetheInternet,” wrote Schumer. His mission? Find one more GOP member to flip against the Trump-appointed chairman.

“All 49 senators in the Democratic caucus are united in support of our CRA to stop the FCC from destroying the free and open internet. We also have the backing of Senator Susan Collins, a Republican from Maine, who has pledged to vote with us,” added Schumer. “That leaves just one more vote to ensure the internet remains free and accessible to all.”

Hitting 51 senators is the magic number, spurring a Congressional Review Act that would “allow Congress to overturn regulatory actions at federal agencies with a simple majority vote in both chambers,” Schumer explained.

Pai has argued the prevailing “heavy handed” rules have stymied investment, and that tech innovation flourished prior to the 2015 regulations. “What is the FCC doing today?” asked Pai at Commission’s vote in December. “Quite simply, we are restoring the light-touch framework that has governed the internet for most of its existence.”

The former Verizon attorney has also been skeptical the new rules will allow major broadband companies to severely hamper their competition since they’ll have to disclose the sites they’re throttling.

Detractors like Sen. Schumer have argued Pai’s plan helps big internet service providers while hurting the consumer. After April 23, there will be little in the way of ISPs charging more for access to Netflix or content from competitors, if they desire. Bundle plans, allowing companies to charge customers a certain amount for social media and another price for streaming sites, will also be on the table.

And to show he’s in touch with the kids, Schumer tweeted on Tuesday the FCC’s new order could kill “Netflix and chill.”

Without #NetNeutrality when a couple is streaming their favorite #Netflix show but it keeps lagging and killing the mood, who will be to blame?

Others followed suit on Twitter, including the ACLU, Sen. Brian Schatz and Sen. Cory Booker.

The idea behind net neutrality is that no corporation gets to block or slow websites you visit. Pay your provider and you get the whole Internet. The good news is that we now have 50 Senators to undo what the FCC did. We need just one more Senator to stand up for #NetNeutrality

Block shots ????, not the internet. #OneMoreVote to save #NetNeutrality pic.twitter.com/g6y1haLKvM