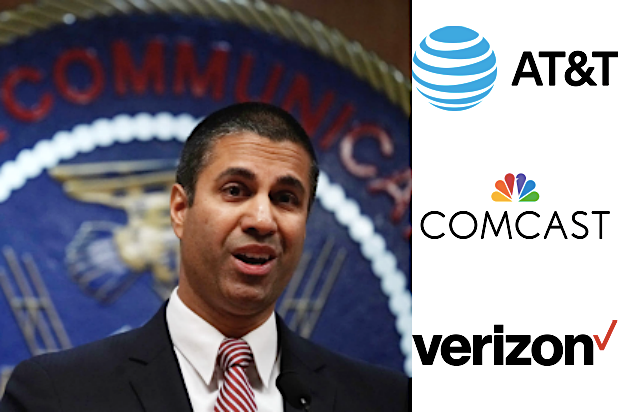 After the Federal Communications Commission voted to pull back net neutrality on Thursday, the floodgates have now been opened for internet service providers (ISPs) to exert more power than they already have. And that means smaller players are at risk of being muscled out of the space.

Moves against the FCC’s highly unpopular ruling are already in motion. Spearheaded by New York Attorney General Eric Schneiderman, a multi-state lawsuit against the FCC’s ruling is expected “in the coming days.” Schneiderman argues that the vote enables ISPs “to favor certain viewpoints over others.”

Still, a successful lawsuit or a move to overturn by lawmakers is highly unlikely.

Also Read: Behind the Disney-Fox Merger: 7 Things We Still Need to Know - and 3 We Already Do

It will be “fairly difficult” to undo the significant changes that were made by this week’s FCC vote, according to Terry Kramer, ex-Vodafone executive and current professor at UCLA Anderson School of Management who spoke with TheWrap.

And the possibility of Congress striking down the FCC’s ruling is highly unlikely: It’d take two-thirds of the House and Senate to negate the move, and it has to happen within 60 days. With the GOP controlling Congress, and the FCC voting 3-2 along party lines, don’t hold your breath.

It’s called “throttling,” or slowing down (or even outright blocking) access to particular websites — and with the FCC’s vote, it’s now on the table for ISPs. The same goes when it comes to charging consumers for paid “fast lanes” to access content. And making streaming heavyweights, like Netflix or YouTube — which account for more than 70 percent of peak internet traffic in North America — pay for better prime time speeds is also in play.

The only “concession” is that internet giants like Verizon, Comcast and AT&T have to disclose this information online or to the FCC — but not at the point of sale to consumers.

FCC Chairman Ajit Pai has argued the “heavy handed” rules passed under the Obama administration have stymied investment, and that tech innovation flourished before the 2015 regulations were put in place. “What is the FCC doing today?” asked Pai at the vote. “Quite simply, we are restoring the light-touch framework that has governed the internet for most of its existence.”

But his enthusiasm wasn’t shared by the vast majority of the country: 83 percent of Americans opposed the FCC’s proposal. As detractors argue, it’s hard (read: impossible) to see where the Commission’s decision will benefit consumers or small businesses.

Kramer said he expects broadband providers to dip their toes into the water just blessed by Pai.

Also Read: Help, John Oliver: How the FCC Is Trying to Trick Us About Net Neutrality

“What the [ISPs] will do is start experimenting with certain paid prioritization models,” the ex-Vodafone executive told TheWrap. “They’re going to get players like Netflix and even smaller ones — who are going to want a certain quality of their transmission — and they will negotiate rates that allow that paid prioritization.”

Netflix has a history of advocating for net neutrality, but this would be less of an issue for its CEO Reed Hastings now. His company boasts 110 million subscribers across the world, giving Netflix the capital to shrug off premiums from ISPs. But this cost could derail new startups from entering the market.

Bad news for the little guy

“It’s a slippery slope, because once you say it’s ‘pay to play,’ then the people that can’t pay are going to be in a disadvantaged position, and that’s always kind of the classic worry about repealing net neutrality,” continued Kramer. “The issue is going to be with medium and smaller companies. Those are the ones that may not have the scale to play here.”

This is something Colin Petrie-Norris, CEO of Xumo, an over-the-top streaming startup, echoed to TheWrap.

“I’m competing against giants,” said Petrie-Norris. “My concern is that, whereas Netflix and others launched with a level playing field in the streaming space, I could be greatly disadvantaged as a new entrant if I’m expected to pay for a high quality streaming experience.”

The ramifications for consumers could be just as dire. A graphic (below) has blitzed the internet lately, showing how the U.S. could soon resemble Portugal by stripping away net neutrality. You want to use Facebook, Instagram, and Snapchat? You’ll have to pay for the “social” bundle. Want to stream Netflix or Hulu? That’ll add on the “video” package to your bill.

In Portugal, with no net neutrality, internet providers are starting to split the net into packages. pic.twitter.com/TlLYGezmv6

In areas with several ISPs, this blow could be somewhat offset by market forces; charging users for apps and services that were once “free,” while your competitor charges a lower price, would be bad for business. And Pai — a former Verizon attorney, keep in mind — believes ceding control to the Federal Trade Commission will prevent companies from exploiting customers.

“The Federal Trade Commission has long had authority and had authority prior to 2015 for almost 20 years over this space,” Pai told NPR last month. “And the result was pretty clear. They took targeted action against the bad apples and they let everyone else thrive in a free market. And I think consumers and companies were better off as a result.”

The problem, however, is that 40 percent of Americans don’t have a choice when it comes to internet providers. The FCC’s own data, as Vice pointed out earlier this week, shows 129 million only have “one option for broadband internet service in their area.” Those customers are left at the mercy of the ISPs.

The silver lining for the millions of Americans mourning the death of net neutrality is that the decision can be overturned under new leadership — just as the Obama-era rules were cast aside this week. In the meantime, It’ll boil down to how much leeway lawmakers give ISPs to exploit its newfound strength.

“The FCC is ultimately going to have to listen to legislators,” said Kramer.  “This is the beauty, ironically, of the internet. When you have a lot of people communicating their displeasure, then you’ll have a change in momentum.”

Until then, expect to see your internet provider scrambling for new ways to charge you for streaming “Stranger Things.”