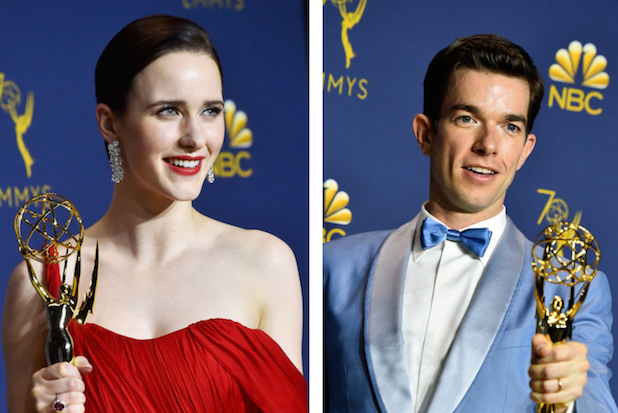 The streaming revolution took another step forward on Monday night at the Primetime Emmys, with Amazon — powered by the success of “The Marvelous Mrs. Maisel” — and Netflix highlighting Hollywood’s increasing dependence on new media.

In total, the big three streaming services — Amazon, Hulu, and Netflix — took home nearly half of the night’s awards, grabbing 12 of the 26 trophies handed out. That tripled last year’s total of four wins for the three companies. (It’s worth mentioning there were nine more trophies handed out at this year’s broadcast.)

“Mrs. Maisel” was the star of the show — much like “The Handmaid’s Tale” was last year for Hulu — netting five Emmys for Amazon, including for Outstanding Comedy Series. Rachel Brosnahan, playing aspiring late-1950s stand-up comic Midge Maisel, won for lead actress in a comedy, while Alex Bornstein won for her supporting role as Maisel’s brash manager. “The Looming Tower,” Amazon’s take on Lawrence Wright’s book on 9/11, was nominated three times, but didn’t earn a victory.

Not to be outdone, Netflix pulled in seven Emmys for the night. The Western drama “Godless” netted both Jeff Daniels and Merritt Wever trophies for their supporting roles, while “The Crown” contributed two awards as well.

Netflix’s big bet on stand-up comedy paid off, too, with John Mulaney’s “Kid Gorgeous at Radio City” winning for Outstanding Writing for a Variety Special.

The night wasn’t as sweet for Hulu, though. One year after being the belle of the ball, Hulu was shut out and its trademark show “The Handmaid’s Tale” lost its bid for back-to-back Outstanding Drama Series victories to HBO’s “Game of Thrones.”

The writing was on the wall heading into this weekend’s awards. Altogether, the big three streaming service earned 161 total nominations — a 31 percent jump from last year. Netflix led the way, with its 112 nominations toppling HBO’s 17-year run as the most nominated network. (HBO, for its part, still pulled in 108 noms and has transitioned about as well as any legacy media company to the streaming world.)

Once Monday wrapped up, Netflix had tied HBO, taking home 23 Emmys this year.

While the streaming services are often coy when it comes to viewership, it’s not hard to see their trajectory in comparison to traditional TV. Netflix passed 130 million subscribers last quarter, Amazon chief Jeff Bezos revealed earlier this year it has 100 million Prime customers, and Hulu boasts about 20 million paying customers.

Their shows are now the mainstream. And with more tech money entering the content battle, expecting YouTube or Apple to crash the party in the years ahead isn’t a stretch.

For a look at all of Monday’s winners, click here.