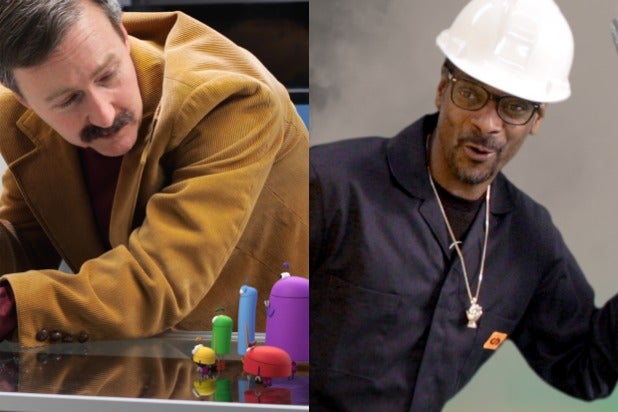 Netflix’s Emmy Award-winning children’s series “Ask the StoryBots” has snagged an A-list cast of characters for its second season, including Snoop Dogg as an Operating System and Ed Norton as Gary the Electronics Salesman, TheWrap can report exclusively.

Starring Judy Greer (“Ant-Man,” “Archer”) as the voice of Beep, the JibJab Bros. Studios-produced show follows the StoryBots, a colorful team of little creatures who live in the world beneath our screens and help answer kids’ biggest questions. Each episode follows Beep, Boop, Bing, Bang and Bo on their adventures to answer a question and features a live-action celebrity guest appearance.

Along with Snoop Dogg and Norton, Season 2’s guest stars include Christina Applegate as the Baker, Kristen Schaal as the Biologist, Ali Wong as the Brain, David Koechner as the Pirate, David Cross as the Hippie, and Wanda Sykes as the Doctor.

“Ask the StoryBots” has racked up three Daytime Emmy Awards for Netflix, was one of just two children’s programs to be a finalist at the prestigious 2017 Peabody Awards, and was nominated in the International category at the BAFTA Children’s Awards. The series is one of the most-binged children’s programs on the streaming service.

“Most kids’ shows just focus on the kids, but we know that adults are usually watching along with them,” said Gregg Spiridellis, the series’ co-creator and co-executive producer and CEO of JibJab. “We want to entertain the parents, too, and they love the surprise of seeing someone like Snoop Dogg or Kevin Smith on a kids’ show.”

While season one of Ask the StoryBots was launched on Netflix in select markets, the newest batch of episodes will be released worldwide.

“Knowing that we’re reaching a global audience, we went big on season two,” said Evan Spiridellis, the show’s co-creator and co-executive producer and the chief creative officer of JibJab. “StoryBots is probably one of the most visually ambitious shows on television. We’re mixing 2D animation, 3D animation, puppets, stop-motion, and live-action all together, and it looks amazing.”

See the full celebrity guest star lineup, along with episode titles, below.

“How Do Computers Work?” with Snoop Dogg as the Operating System

“Why Can’t I Eat Dessert All the Time?” with Christina Applegate as the Baker

“How Many Types of Animals Are There?” with Kristen Schaal as the Biologist

“How Do Ears Hear?” with Ali Wong as the Brain

“How Do Volcanoes Work?” with David Koechner as the Pirate

“What Is Electricity?” with Edward Norton as Gary the Electronics Salesman

“How Do Flowers Grows?” with David Cross as the Hippie

“How Do People Catch A Cold?” with Wanda Sykes as the Doctor

“Ask the StoryBots” Season 2 will be available Aug. 24 for streaming on Netflix.