Netflix’s recent Wall Street rally continued on Monday morning, less than a day after the streaming giant separated itself from competitors HBO and Amazon while racking up the most awards at the 2019 Golden Globes.

Netflix shares are up 4.88 percent in early-morning trading — cracking the $300 barrier for the first time in two months in the process — hitting $312 per share. The company’s stock is now up nearly 20 percent in the last week. 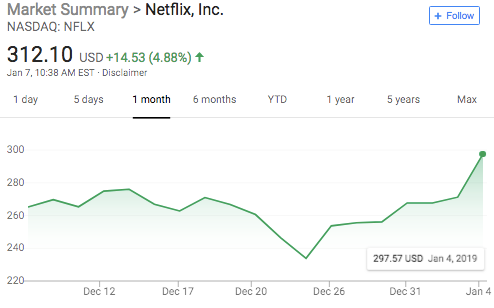 The Los Gatos, California-based company potentially grabbed investors’ attention after it led, along with FX, the Golden Globes with three TV category wins — with Michael Douglas taking home the best actor in a comedy series award for “The Kominsky Method,” which would later grab the Globe for best comedy series. Netflix earned its third TV win of the night when Richard Madden, star of “Bodyguard,” a BBC show that Netflix streamed exclusively outside the United Kingdom, won for best actor in a drama.

HBO and Amazon, meanwhile, took home one TV award each, despite leading the TV categories with nine nominations apiece.

Of course, to battle HBO, the godfather of prestige television and Amazon, led by the world’s richest man, Netflix has spent big to put out hundreds of new shows, easily running past its competitors in sheer volume. In 2018, Netflix debuted 345 new original series, according to Quartz last week. Netflix strategy of throwing as much against the wall as possible and seeing what sticks worked, at least at the Golden Globes.